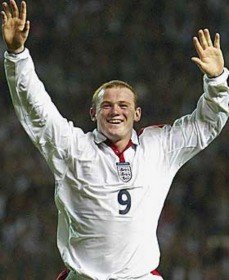 Was it really four years ago that the nation was fretting over the state of David Beckham's foot after a tackle by Aldo Duscher? That was April 11th 2002, and when England's World Cup kicked off a little over 7 weeks later in Saitama on 2nd June, it was clear that Beckham wasn't really fit enough, and performed significantly below his best for the duration of England's stay in the tournament.

England's campaign for the 2006 World Cup kicks off against Paraguay on 10th June. That's six weeks today - the exact amount of time that the Manchester Utd medical team think is the minimum that Rooney will need to be playing again.

Let's be realistic: it doesn't look good, does it? If Rooney is out, surely England's best chance of winning the World Cup goes with him. We've got one or two other decent players, but he was the one with the magic in his boots, wasn't he?

Could it get any worse? Well, yes. It looks as though Michael Owen is in trouble as well. He was always struggling for fitness with his foot injury (his last proper run of matches was before Christmas), but he left the pitch today complaining of pain in his foot, and if he makes the squad at all, at the very least will be desperately short of fitness and match practice.

What are the odds on either of these players playing a meaningful part in England's World Cup squad? Are England going to be lining up against Paraguay with Peter Crouch and Darren Bent up front? Not to mention the fact that Ledley King is probably out, Ashley Cole has hardly kicked a ball all season and Gary Neville and John Terry both limped out of today's game.

Who said Sven was a lucky manager?

On the plus side, I've got my Panini sticker album up and running, and apart from having about 5 Brian McBrides, I'm doing very nicely thanks.....
Posted by swisslet at 11:10 pm 5 comments:

Okay. Lord B is at a Take That concert this evening (for real), so you've got me again this week. Bumper set of predictions this week because of the bank holiday weekend. Big day in the Championship on Sunday too.... will Wolves finish 7th? Oooh the tension.

and the wildcards - towns where I have lived (kinda):

Enjoy the weekend, y'all. 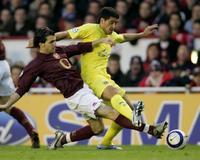 Congratulations to Arsenal, who despite not turning up last night managed to scrape through to the Champions League final with a 1-0 aggregate win against Spanish side Villareal. A dreadful penalty decision in the 88th minute nearly saw the tie go into extra time, but justice was done with Jens Lehmann's excellent penalty save from Juan Riquelme.

I don't like Arsenal much. At all. However, I found myself hoping that they would qualify for the final last night, much to my mum's disgust. She cheers for foreign teams against the English sides we don't like (Liverpool, Man City, Leeds, Arsenal, Chelsea etc).

Hello. Having just been walloped 6-0 in a game of 11-a-side last night, I'm not sure I'm quite ready to talk about football again just yet.

Alas, it's that time of the week again, so although the pain and humiliation are still fresh in my mind, I'll have to just get straight back on the horse....predictions please.

And this week's wildcards.... 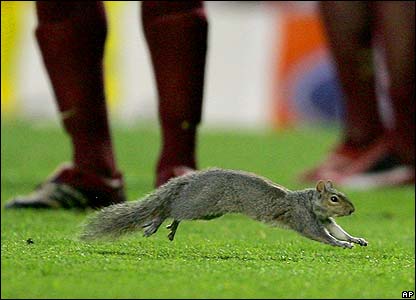 At least we now know the attributes required for broaching the makeshift Arsenal defence (6 cleansheets and counting in Europe). All Villareal need to do in the return leg to overturn their 1-0 defecit is to find a small, lithe and pacey forward with a fluid running style and teeth like Ronaldo.

Ronaldinho will be busy elsewhere, so I think they should intensify their search for this squirrel to partner Diego Forlan on Tuesday next week.

Well, they should be able to sign him for peanuts anyway.

Please make this England manager thing stop. Alan Curbishley thinks he has blown it as no-one has given him a call. Guus Hiddink has got the hump with how long the process has taken (haven't we all?) and buggered off to Russia. Big Sam is committed to the Bolton job, despite clearly desperately wanting the FA to appoint him. And apparently, the bookies favourite is now Steve McLaren. 'Big Phil' Scolari and Martin O'Neill remain in the mix.

Discounting the fact me and a couple of colleagues have £400 on Martin O'Neill to become the next Newcastle manager, I wish the FA would decide. If they are going for an Englishman (definition now includes Northern Ireland apparently), they should pick someone and get this farce over with. By the time Sam Allardyce has his fourth interview, even he might get a bit peed off with the process.

Steve McLaren seems to be the only man with the credentials in terms of experience at a high club level and at international level (England only play in cups, remember) but a less charismatic man it would be difficult to find. If the FA want a safe pair of hands, that's what they will certainly get with McLaren. (Although Stuart Downing might get an England cap).

So, who do we want, then? Seeing as the FA seem to have ruled out any decent choices (I'd have had Hiddink myself. Actually, no, I wouldn't have got rid of Sven...) with their remaining shortlist, it's got to be McLaren for me, I think. I must be getting old....
Posted by LB at 3:22 pm 4 comments:

Predictions time again folks. It's Easter, so it's something of a bumper edition.

(I manage Roma, Swansea and Wolves in the game I'm playing at the moment. Wolves have just been rated as 2000/1 outsiders for the Premiership title in 2006/7 after promotion via the playoffs. It's so unrealistic....)

Middlesbrough? Eh? What's that all about, then?

and from last week, confirmation that the random foreign wildcard results were:

I'd have been alright on the Pools coupon, eh?

and from the top of their respective divisions