and perchance the topical wildcard of

What with all the excitement of England's glorious qualification for the FIFA World Cup, it's been kind of easy to overlook the other nations that will be making up the numbers in Germany next summer. I thought it might be nice to have a look at them, and perhaps make an instant value judgement of their chances of making an impact:

This is where the big news is - all the qualifiers here will be competing in their first World Cup, and there will be no Nigeria, no Cameroon and no South Africa (the hosts of the 2010 tournament). But then again, it's easy for us to think of this as surprising - Senegal were one of the surprise packages of the 2002 World Cup, and famously beat the holders France in the opening game of the tournament - but followers of African football would have been able to tell you that they were a decent side. They had been runners up in the African Cup of Nations in that same year. Tunisia are the current holders of the African Cup of Nations. Didier Drogba plays for the Ivory Coast, but otherwise they are apparently half-decent....

Very much the usual suspects here. Co-hosts of the 2002 tournament Japan will be hoping to build on their 1/4 final appearance in 2002... but I think all eyes will be on Korea: surprise semi-finalists in 2002. Will they be able to reach those heights again?

Yawn. Good to see Serbia & Montenegro in there, and it will be great to see Andre Shevchenko grace the biggest stage of all with the Ukraine. Otherwise it's a little hard to get excited.

Mexico are 5th in the FIFA World Rankings, The USA are 6th and Costa Rica are 23rd... so they should all be worth watching in Germany....

No real surprises here: these 4 sides finished comfortably at the top of the South American qualificiation group (which was won by Argentina)

A few big names in here: Spain (8th in the FIFA rankings) have never won the World Cup, and seem to have made a habit of performing even worse than England. The Czech Republic are ranked 4th in the FIFA rankings & should come through against Norway (36th). Turkey (12th) were of course semi-finalists last time around... It will also be interesting to see if Australia (60th) can beat Uruguay (18th) in a repeat of the play-off for the 2002 tournament....

Whatever happens next summer, you can guarantee a couple of things:
Personally, I love watching the obscure games the best... the ones that certainly don't involve England, and probably involve two teams I have never, ever watched before.... I'd have been quite content if England hadn't made it, although I will admit that nothing matches the nail-biting tension of a backs-against-the-wall performance from our boys to ensure a lucky escape from the group stages.

Incidentally, I watched the last World Cup final on the big screens of the Pyramid Stage at the Glastonbury Festival... just after Rolf Harris had finished his set. I was sloshed on cheap red wine drunk from a 500ml mineral water bottle, and because there was no commentary, my memories of Ronaldo's goals are of me dancing with my friends to the cheerful samba rhythms being piped through the PA.

All predictions up to date (blows fanfare).

Charby leads overall but Ben now in front for October. It remains to see whether he'll follow his beloved Newcastle and piss this up the wall at the eleventh hour just as it looks as if he may win something, but I am sure he would "love it, just love it" to beat everyone else.

*points angrily at interviewer*
Posted by LB at 10:19 pm 6 comments: 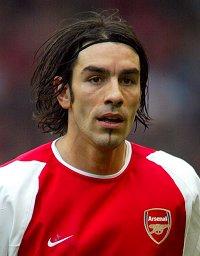 *LB is weeping with uncontrollable laughter*

"I didn't expect his leg to go numb" says a bent-over-laughing Thierry Henry.

Robert Pires dances over the football, grazes it with his studs and City clear despite Thierry Henry ambling towards the penalty area....

At least Arsene Wenger saw it. His eyesight must be improving.
Posted by LB at 10:58 pm 5 comments:

Predictions time again (though why any of us are bothering with Charby still involved I am not sure...)

If any of you are short of a bob or two, I would suggest taking whatever money you do have, checking Charby's predictions, and placing your cash on whatever she suggests.

Predictions updated to include the international fixtures (Charby got seven of the results exactly spot on) but not the most recent Premiership games. Will do them in due course.

*pants out of breath at trying to work all this out*

Hope this is OK.

Ok, final predictions table for September is as follows:

Congratulations to Charby who also leads the "cumulative" race. When I have twenty four hours free, I'll have a bash at those international fixtures...
Posted by LB at 2:11 pm 6 comments:

(not forgetting that night also:

I will update the predictions tables soon, I promise. As some of you may know I have been on holiday (it is worth looking at that link if you want a quick peek at the largest bag of cheese based snacks you have ever seen) and since I got back I haven't had much time to have a look. And there's three weeks to do including the most ludicrous set of international fixtures so it will take me ages...

For some reason I thought there wouldn't be any Premiership fixtures this weekend, but apparently there are... so the predictions league rumbles on. I know we haven't had an update on the scores for a little while, but Lord B is back this weekend, and he can get it sorted. Could be some big changes though, eh?

and this week's wildcard:

There's nothing better than the anticipation one feels on the morning of a big international fixture. The excitement starts to build over breakfast, and will reach fever pitch shortly before kick off, as the players come out for the national anthem. Never fails to bring a tear to my eye as I watch our brave boys puff their chests out and try to remember the words.

This evening England take on the mighty Poland for the sixteenth time. They have something of a reputation as being our nemesis in World Cup qualification campaigns - thanks to Tomaszewski 'The Clown' in 1973 - but in fact they have only managed to beat England on one occasion. Both sides have of course already qualified for the 2006 World Cup Finals in Germany, but I'm sure the game won't be sterile and toothless.

There's professional pride at stake, after all. International fixtures like these hold a special place in the hearts of the players. They can forget about their humdrum day job in the Premiership and play their hardest to impress the manager and for a chance to strut their stuff on the biggest stage of all in the Summer. Expect lung-busting box-to-box running, full-blooded tackling and heart-on-sleeve committment. Expect despairing dives, goal-line clearances and spectacular goals. The Manager will expect nothing less. The nation expects nothing less. This is our national side.

But just in case you disagree. On BBC2 there's "How to Rescue a House" followed by "Rick Stein's French Odyssey". ITV has "Coronation Street" and "The Bill" followed by Julia Roberts and Richard Gere in "The Runaway Bride". On Channel 4 it's "How Clean is Your House", "You Are What You Eat" and "Supernanny" and on 5 we have "Rattlesnake!" followed by Demi Moore and Patrick Swayze in "Ghost".

OK. So I didn't get to see a single kick of the game, and yet already I'm thinking this may have been 90 minutes of my life better spent.

How was it for you? Anyone care to give me the lowdown?
Posted by swisslet at 8:40 pm 11 comments:

I don't know if Lord B is going to be able to find a few moments to interrupt his Canadian trip to update the predictions league.... but frankly, the show must go on regardless. We get a break from the tedium of the premiership this week and get to have a go at the tedium of international football instead......... just be sure to break out the FIFA world rankings to help you make your predictions - they're a foolproof guide and no mistake!

There's a lot of fixtures here, so we could see some real movers and shakers in the table....

As a non-premiership supporter, I'm quite tickled to watch Man utd, Arsenal, et al floundering around in Chelsea's wake (& Charlton's).

Jose was on telly at the weekend saying his team deserves more respect from the media & the general public. Alright they've got pots of dosh but for how long have Man Utd had more money than everyone else?

So are they unbeatable?
Surely not?
Who is going to beat them then?
Here's their next 10 premiership fixtures...

Ok, so there's tricky trips to Old Trafford & Highbury in there, but can even they beat them?
If they can't who can?
Posted by Flash at 7:36 pm 5 comments: