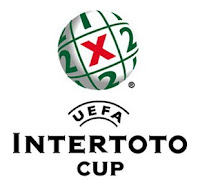 It's a bit boring this summer with no football on. No World Cup, no European Championships. I've even tried watching some of the under-21 Championship (not that interesting, believe me).

Anyway, believe it or not the new season starts on Saturday as teams from as far and wide as Iceland, Slovenia and Andorra kick off the first-legs of their first round Inter-Toto cup matches.

Any competition containing a team called FC Honka is OK with me.
Here we go again, then....
Posted by LB at 10:48 pm 3 comments: 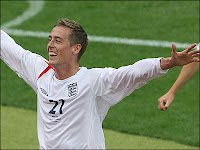 Fortuitously, some would say, I missed most of the England v Estonia game last Wednesday night as I was flying to Bratislava for the wedding of fellow contributor Swiss Toni.

I arrived in my hotel room and flicked on the TV and after a bit of channel-hopping I happened upon the match on EuroSport (about 75 minutes in).

After a moment I realised that it had the benefit of German commentary and so stuck with it for a few minutes. Just as I was about to turn off and go out for some dinner, the commentator went very silent and the camera panned to a close-up of the English football pin-up and legend above.

Some silence. And then the German commentator broke the silence.