Hello again (I will update the table soon, honestly I will...)

it's the Johnstone's Paint Trophy Final! (well it's a pot. More than Liverpool will win this season)

So, after our excursions to 's-Hertogenbosch for Friday night's Jupiler League fixture, we had a day of rest (just as well, as we ended up spending it at Eindoven's Maxima Medisch Centrum). Sunday took us back to the Eredivisie and to the pretty central city of Utrecht, Holland's fourth largest.

It was a rotten day, frankly. Persistent rain bounced off the gloomy, ghostlike town centre as we ploughed our way through the deserted shops to the museum quarter. We walked under Utrecht's "Dom tower" (Holland's tallest ) and eventually found the Centraal Museum and, beside it, the Dick Bruna Huis, a colourful and entertaining exhibition of the work of the creator of Miffy and his friends.

Then, back to the city centre, we hopped onto one of the multitude of free buses to the Stadion Galgenwaard.

FC Utrecht are an even newer team than Den Bosch, being founded in 1970 by the merger of three local clubs. They hold the distinction of being the only club outside the "big three" never to have been relegated since its formation in 1970 although in recent years they have been mired in the middle of the Eredivisie - always too good to go down but never a serious challenger for the title. 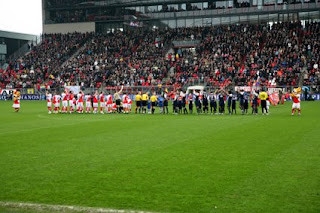 This season is no exception. Utrecht came into the game on the back of a pretty poor run, despite their 3-1 victory over PSV in their last home game. Opponents AZ, however, are having the season from hell. Having gone into the last match of the 2006/7 season needing a win to be the first club outside the "big three" to win the title since 1980 they lost 3-2 at Excelsior and finished in third place.

This season, they have been a model of inconsistency as their respected manager Louis van Gaal has been unable to capitalise on last seasons success and they have spent the whole campaign in the bottom half of the table (losing top scorer Danny Koevermans to PSV clearly didn't help).

Michel in the ticket office had reserved us good seats ("next to the fanatic side", as he put it) but when we got there, we realised we were in the second row. Great view, but we got absolutely drenched as the stand offered us zero protection from the elements. 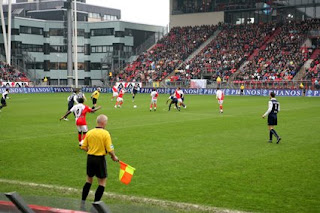 AZ had much the better of the first half as Utrecht's 4-5-1 formation failed to penetrate (getting serious for a minute, this system relies heavily on midfield runners supporting the lanky lone striker (amusingly coiffeured Dutch legend Robin Nelisse) but other than tricky winger Leroy George and the superbly monikered youngster Randy Wolters (a career in country and western eschewed to play on the Tiger's right wing) there was precious little support.

So, half time arrived and the match remained goal-less. As I stood in the pouring rain with 21899 others, freezing cold, I began to worry that my weekend excursion was going to result in a goalless debacle (Friday's game ended 0-0). Thankfully, eight minutes into the second half AZ midfielder Barry de Zeuuw rifled a right-foot shot into the top corner and the match came alive. Utrecht, whilst not the strongest collection of individuals have a great team ethic, and talented midfielder Cedric van der Gun nodded in George's corner just after the hour. Substitute Kevin Vandenbergh then slotted Utrecht ahead and it looked like Utrecht's endeavour was going to win them the game. That was until they failed to clear an innocuous corner in injury time and El Hamdaoui rifled in a last-gasp equaliser.

A fair result, I guess. I have to confess to be leased to get out of the Galgenwaard, bearing in mind I have rarely been as soaking wet in my life. Perhaps next time I'll go to some August or September fixtures, eh?
Posted by LB at 8:22 pm 3 comments:

and some wildcards from next weeks international friendlies

As I have mentioned here before, one of the main reasons I continue to line Setanta Sports' pockets to the tune of a tenner a month is that they have excellent coverage of Dutch league football. I say "excellent". To clarify somewhat, their coverage is extensive and fulsome although their commentary is decidedly ropey (one such eejit spent an entire NAC Breda match calling them "Roda" just because they both wear a yellow strip, for example).

Anyway, having seen some Dutch league football before, a return was long overdue and so the wife and I picked a great weekend to go - when Spurs were in town. Thankfully, our trip included a couple of nights in the fine Belgian haven of Antwerp and so we escaped the worse of the North London invasion.

This time, I plumped for a Friday night match from the Dutch Jupiler League - their equivalent of the Championship. A short train ride from our base in Eindhoven took us to the pretty market town of 's-Hertogenbosch and a 158 bus carried us to the de Vliert Stadion on the outskirts of town. 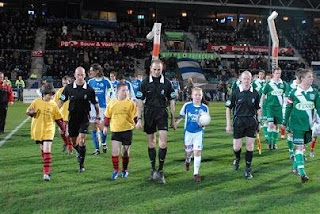 FC Den Bosch are not that famous a club. Their previous incarnation, BVV, won the League in 1947 but since they became Den Bosch in 1965, the odd promotion to the big time has been the limit of their success. Oh, and the odd big player passing through onto bigger and better things (one Rutgerus van Nistelrooy figured for a short spell).

This was a top of the table clash though - third place FC Zwolle were the visitors with fourth place Den Bosch looking to avenge their 4-1 thrashing in the reverse fixture earlier in the season.

After a trip to see Marion in the friendly fanshop (they only had away shirts in anything approaching an adult mens size, but for your €25 they did throw in an authentic pair of away shorts also) we bought our tickets (a reasonable €13) and headed for the bar.

Well, I say "bar". The reality was that the function facility for the home faithful was a small Portakabin at the back of an untended grassy bank containing a couple of lavvies, a beer keg and some faded pictures of bygone glory days. It also contained any number of dubiously aged kids sloshing Bavaria to no-one's concern and some of the worst sweatsuits this side of a Sports Direct firesale. 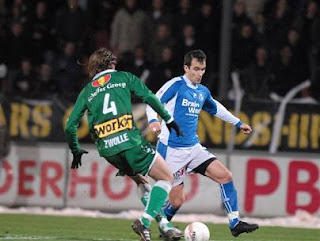 Anyway, 8 o'clock duly arrived and to far to grand a fanfare we got started.

To be fair, there's not much to write. The away support was (like every Dutch game I have ever seen) pretty pitiful, although the large minibus load that turned up did their best to make themselves heard. Den Bosch fielded a stray Irishman named Barry Maguire who, despite being tidy enough, I couldn't help think had missed out by a different vowel and a different consonant on being the best monikered footballer in the world game. "Help me, help you!" (etc).

Zwolle's shirts were also by some distance the busiest I have seen for a while - no room for the players names you'll notice as there's more than enough going on with the sponsors...

All time Macedonian international goalscorer Georgi Hristov (famous only in the UK for claiming all the women in Barnsley were "dogs") showed why he has found his level in European football (over 200 games for Den Bosch) by turning in a mediocre performance and missing the home side's best chance from open play. Their best chance of the night though came when a dubious first half penalty award gave Koen van der Biezen the opportunity to dribble the worst penalty I have ever seen in the flesh miles wide of the keeper's right hand post. I have also never heard such an uncharitable cheer when a player is substituted as greeted the sign of the number 19 trudging disconsolately towards the dugout.

The home fans - a total of 4381 of us braved the match - were loud enough albeit in a tuneless and slightly gruff way. It consisted of not so much singing as neanderthal grunting for most of the game, although I do appreciate that "you're going home in an apostrophe S hyphen Hertogenbosch ambulance" doesn't scan all that successfully.

Whilst LB takes in a bit of Miffy and a touch of football, it's predictions time again folks.

Places I've lived (in order, and all playing at home): 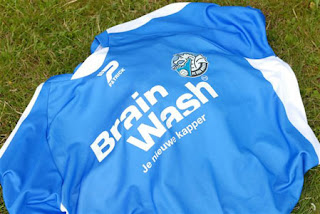 I like a foreign football excursion and since last years trip to Hertha Berlin, I haven't had a chance.

So, this weekend (timed amazingly badly to coincide with a Spurs away match), the missus and I are off to Holland and Belgium for a long weekend.

Friday night we'll be at the de Vliert stadium in s'Hertogenbosch to see FC Den Bosch v FC Zwolle in the Dutch equivalent of the Championship. How can you not love a team sponsored by BrainWash? Plus, fact fans, Georgi Hristov plays for them (remember him? Played for Barnsley in the Premier League?)

In my mission to visit every ground in the Eredivisie (Feyenoord in the past and NEC, Ajax and PSV last time out) we're going to FC Utrecht on Sunday to see them play struggling AZ Alkmaar. 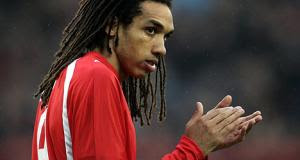 Robin Nelisse has great hair. Not the best reason, clearly....

Amongst that lot there's a stop in Antwerp for a couple of nights (shame I couldn't take in a Royal Antwerp match considering they are United's Belgian feeder club - John O'Shea is a legend there, apparently). Still, waffles, moules, De Koninck - how wrong can you go? 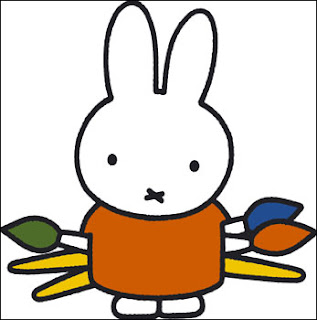 I am also reliably informed that our day out in Utrecht in Sunday will also include some Miffy
- Utrecht's most famous export.

Looking at the iconic rabbit, I can't help thinking that FC Utrecht's shirts would benefit from some Miffy action?

Maybe I do need a holiday.

I'll try and get my missus to watch some more footie over the weekend whilst only half listening....

and it's first versus second on the continent: 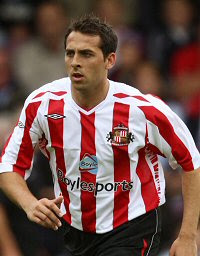 Part 2 in a short series of "footballers names my wife has misheard during commentary".

"Did he just say that guy's name was Shopfront?"