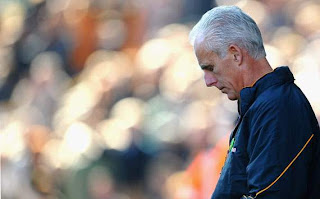 It's over: after 5 years and 207 days, Mick McCarthy is no longer the manager of Wolverhampton Wanderers.

I watched the game on Sunday and we were abject.  We were fortunate to get into the changing rooms at half time with the score at 1-1, but it's hard to deny that we didn't deserve the spanking that West Brom eventually handed us.... A few weeks ago, I chuckled at some Nottingham Forest highlights from a hiding that Leicester gave them at the City Ground.  I laughed because the defending was so appalling, with Forest players failing to chase after balls and just allowing their opponents to walk all over them.  It was like watching a side that wanted to be beaten and got everything they deserved.  Yesterday, watching Wolves was much the same thing.

It's hard to argue that you couldn't see this sacking coming: 14 points from our last 22 games; 21 points from 25 games in all; one home win in our last 13 games in all competitions; 18th in the Premier League with 13 games left to play.... If the club was going to make a change, then it's probably better that they acted now rather than wait any longer (although January would have been even better).  The chairman wading into the dressing room to bollock the players after our defeat to Liverpool at Molineux at the end of January was probably the beginning of the end for McCarthy.  Some fans have been calling for his head for some time, and maybe it's my imagination, but he seemed a little more beaten down after that.  It's one thing losing to Liverpool, Manchester United and Chelsea (all sides we beat last year, as it happens), but losing to your fierce local rivals in such a supine way is something else entirely.

Were the club right to sack him?  Well, I would have kept him on, but ultimately only time will tell... although it is instructive that we were bottom of the Premier League this time last season and we still managed to escape, albeit by the skin of our teeth.  If we end up with someone like Steve Bruce or Neil Warnock in charge, then I'll find it hard to believe that we've really moved forwards as a club.  Plenty of other clubs have run aground seeking to take things to 'the next level'.....Changing manager and ending up with Martin O'Neill is one thing, ending up with Colin Wanker is a different kettle of fish entirely.

McCarthy is often described as being one of those managers who just isn't good enough at the highest level, and you could point at Big Mick's overall Premier League record, and it does look pretty bad....

.....but the plain fact is that he leaves Wolves in a better state than he found us: he got us to the top division where numerous others - including two former England managers -  had failed; he kept us in the division for two seasons running and we're not dead yet this season either.  Maybe his teams didn't ever really play scintillating, attacking football (nor, come to that, did they ever really keep clean sheets), and he always had a marked preference for hard workers over flair players, but it really isn't that long ago that we were languishing in the old Fourth Division on the verge of going out of the league and out of business.  Hell, when McCarthy joined us, Glenn Hoddle hadn't even left the club with a full complement of players! As a club since then, we've spent within our means and have kept salaries under control whilst generally performing well enough on the pitch.  If the worst thing happens and we do go down this year, at least we won't be looking at going out of business altogether.

It's a shame it had to end like this, but I'll always be grateful to Mick for what he did for Wolves - he's the best manager that we've had in the last 25 years and I think he can leave with his head held high.  Apart from anything else, his press conferences were always brilliant: there's enough bullshit about football and there was certainly none around Big Mick.   He always said that the MM on his tracksuit didn't stand for Merlin the Magician, too.  He was always very clear about that.

Good luck Mick and thanks for everything.
Posted by swisslet at 8:23 pm 1 comment: 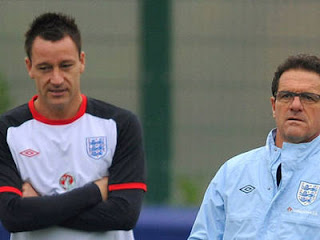 English football in 'shambles' shocker. With a major tournament around the corner, the FA intervene and strip John Terry of the England captain without consulting the manager. The manager resigns. England have no captain, no manager and naff all chance of winning Euro 2012.

In many ways, I don't blame Fabio Capello for leaving. His heart doesn't appear to have been in the job for some time, and the FA's decision to step in clearly undermined the manager who, frankly, should be the one to pick his own captain.

Saying all that, quite why you'd leave a £6 million job over John bloody Terry, heaven only knows. Remember that Capello was the man who stripped Terry of the England captain's job in 2010 after reports he had an affair with Wayne Bridge's ex-girlfriend. Considering Capello made that decision based on a load of tabloid tittle-tattle, it seems odd that he'd dig his heels in now over a far more serious issue - namely Terry being accused of a criminal offence while performing his job as a central defender for Chelsea.

Personally, I'd not have John Terry anywhere near my England squad anyway. The defender has been dogged by controversy his whole career (although on that basis you'd struggle to get an England team together in this day and age) from assault charges to allegations that he misused his position at Chelsea to 'sell' tours of the club's training facilities.

Plus, the 31 year old is clearly not the player he once was, and there are a handful of better, younger defenders that deserve their chance.

Stuart Pearce will take charge of England for their next match, before Harry Redknapp is likely to take over (although why he'd leave a very successful Spurs team for us all to call him an incompetent nincompoop when England get knocked out of Euro 2012 in the quarter finals, Lord only knows).

Considering all that's happened in recent weeks, we might as well appoint Luis Suarez and Patrice Evra as the next England managers. Nonsense.
Posted by LB at 1:02 pm 1 comment: