They hire a temporary manager to look after the team until the end of October - someone serving a touchline ban from their last football mangement job and who therefore cannot actually sit on the bench until 20 October.

And wildcards from the FA Cup Qualifying, 2nd Round:

You might have seen this already, but it makes me giggle every time I watch it. I think it's taken a couple of years off Sir Alex's life.....

[Scroll down for predictions - they are in this post!]

At the risk of upsetting the few lovely and loyal Newcastle supporters that frequent this site, I did find myself nodding at this article written by Matthew Syed in this weeks Times.

"The only way that Newcastle fans are ever going to be truly happy is when they have formed a collective to buy the club and have made a pig's ear, as they inevitably would, of a kind that would make Freddy Shepherd's last remaining strands stand on end. When they have rehired Keegan to manage the team, Shearer to be his assistant and the ghost of Jackie Milburn to do the scouting. When they have got control of the club and discovered that their own volatility makes it practically ungovernable."

Also, whilst I strongly believe that the outcome of foul play in football should not in itself influence the punishment (Martin Taylor and Danny Guthrie should not simply be banned for longer just becuase the recipients of their red card tackle were seriously injured), I do think the FA needs to look at some sort of sliding scale for penalties. A straight red for a clumsy professional foul having the same ban as for Guthrie's terrible tackle (borne of frustration, not malice, I suspect) seems unbalanced. By all means ban players for cheating, but on-field thuggery and violence is different, and should be treated differently.

Anyway. Predictions time (I hate the UEFA Cup. It means there are hardly any games on Saturday's Match Of The Day....)

and let's make our first trip of the season to the Eredivisie, shall we? 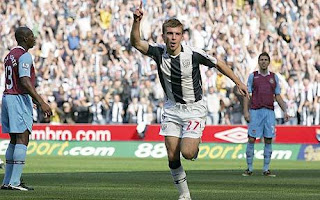 Watching the West Brom v West Ham game at the weekend, I wondered when the last time was that two top flight clubs played each other with neither of them sporting a shirt sponsor. Other than a freak scenario like this one, it must have been the Seventies, mustn't it?
Posted by LB at 9:10 pm 5 comments:

Well, who saw that coming? Do you think that Sven is sitting there stroking his metaphorical moustache having seen something two years ago that no-one else had.....?

and some wildcards from the seemingly forgotten league of European football:

Hmmm. Here's a question for you. Who would you less like to see on a football pitch?

(a) Chelsea and Serbia defender Slobodan Rajkovic, banned for one year for spitting at a referee during the Olympic Games

(b) Newcastle and England midfielder Joey Barton, banned for six matches for violently assualting a team-mate, leaving him with a suspected detached retina, cuts and bruises "looking like the Elephant Man"

Someone at FIFA probably needs to sit down, have a look at these two cases and have a sensible think about their sentencing process for football offences.

For anyone that hates Barry Davies as much as ST and I do, there's an interesting piece on the Guardian website (you may notice both ST and I amongst the angry commentators arguing that the original piece was poppycock.)

Oh I Do Like To Be Beside The Seaside

So, as a surprise to basically no-one outside the North East, Kevin Keegan has today parted company with Newcastle United.

I actually feel a bit sorry for King Kev. With a wafer thin squad, the club's decision to flog James Milner to Aston Viller and bring in an untried Uruguayan and a striker who, the season before last, was on loan in the Spanish second division hardly smacks of a brilliant transfer policy.

To be fair, the appointment of Dennis Wise as Chief Transfer Person was utter lunacy in the first place - a bit like giving me the job of presenting Top Gear as I drove a Volkswagen Polo once. Wise was a tenacious but ultimately limited talent (and, let us remember, an idiot) and so what qualified him to be put in charge of a multi million transfer policy? Plucked as he was from the job of managing a third division club on limited resources, it hardly smacked of having an address book full of international contacts, did it?

And then there are the people who run the club. Fresh from the embarrassment of Freddie Shepherd and his cronies the club got a clueless beer-swilling idiot who appears to want Newcastle to be challenging for the Champions League without having to open his chequebook.

I'm sorry, Newcastle fans, but your club has yet again been made to look ridiculous in front of everyone. Parting company with your manager the day after transfer deadline day is not really that attractive a proposition to a potential new coach, is it? Having to work with a tiny (and frankly not terribly talented) squad will be a completely thankless task. I suspect Wise himself will get the job, and if he's the sort of calibre manager your club is looking to attract then it is going to be a very, very long ten months indeed.
Posted by LB at 6:35 pm 6 comments:

They play in different leagues, so perhaps the comparison isn't valid, but two different results and contrasting styles of play caught my eye this weekend:

Wolverhampton Wanderers stormed to the top of the Championship table with an utterly convincing 5-1 defeat of Nottingham Forest at Molineux on Saturday. It was a game notable for the impact made by two genuinely flying wingers: Michael Kightly and Matt Jarvis. England U21 International Kightly, picked up for a nominal fee from Gray's Athletic late in 2006, scored two goals and Jarvis, signed from Gillingham in June 2007 for an undisclosed fee, was named man of the match. Both players are 22 years old, both are two-footed, both are English and both are out-and-out wingers. Last season, due to injuries, the two players did not manage to play in the same lineup. This year, they're both fit and have been a crucial part of Wolves' early season form. Perhaps not surprisingly, the Molineux pitch has been lengthened by five meters this year to better accommodate the flying wingers and to give them room to work behind opposition full backs.

A rather different tactic was deployed by Rafael Benitez at Villa Park on Sunday afternoon, where his Liverpool team took to the field with a stifling 5 man midfield featuring two strikers signed for a combined £30m playing on the flank. Redoubtable players they may be, but for all their manifold other talents, Dirk Kuyt and Robbie Keane are patently not wingers. I saw an advert for the new season's Liverpool shirt in the window of a sports shop over the weekend. "This isn't a badge," it trumpeted, "it's a family crest". Liverpool fans are rightly proud of their history, but this heritage also seems to have convinced them that they have some sort of divine right to the title and that this year.... every year... will be their year. With a spine of players that includes Reina, Carragher, Gerrard and Torres, they certainly ought to be competitive.... and far be it from me to criticise a manager as succesful as Benitez, but even I can see that they lack the genuine width that surely would make them harder to defend against. Yesterday's formation seemed to stifle Aston Villa's creativity, it's true, but it's not as though Liverpool came up with much either, Keane scuffing their best chance, and the result was a fairly dull 0-0 draw.

As Paul Doyle pointed out in the Guardian this morning, the Anfield pitch is 101 meters long and 68m wide. The minimum required pitch dimensions in the Premier League are 90mx45m, so in theory Liverpool could afford to shorten their pitch by 11m and reduce the flanks by a further 11m on either side. If they persist in playing in the narrow way that they do, perhaps they should consider it.... unless, that is, they're happy to remain the fourth best side in the top four.

As for Wolves....well, it might not be fashionable for clubs in the top flight to buy English talent from the lower divisions, but if they both maintain their form and fitness, surely it won't be long before Kightly and Jarvis are turning full-backs inside out in the top division. Ideally that would be with Wolves next year, but if they somehow manage to finish in their customary 7th position, then I'm sure someone else will give them their chance.
Posted by swisslet at 8:01 am No comments: