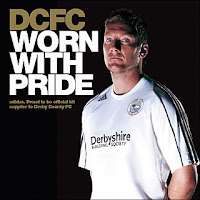 Some absolutely first-class understatement from Jon Champion on Setanta tonight.

"Derby have set a new benchmark for Premier league unsuitability...." 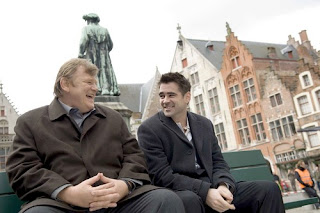 There is a scene in Martin McDonagh's excellent new film "In Bruges" where Colin Farrell asks Brendan Gleeson if he believes in heaven and hell. "What's that place in between?", muses Farrell. "Is it purgatory? That's where you go when you are somewhere in-between, not really good but not really sh*t either?"

Farrell ponders this.
"Like Tottenham?"
Posted by LB at 9:22 am No comments:

Following my somewhat withering assessment of Ronald Koeman's managerial ability here, it will come as no surprise to anyone who's followed his coaching career that he has been sacked as manager of Valencia after just six months in the job.

It actually might go down in history as one of the most hapless managerial stints of all time. He took over when Valencia were fourth, four points behind leaders Real Madrid and leaves them sixteenth, two points off the relegation zone and a mere 33 points behind Real. He won 4 of his 22 games in charge and alienated a grand proportion of the fans and players by sidelining experienced internationals such as Canizares, Angulo and Albelda. The final nail in his coffin was the 5-1 defeat to Bilbao this weekend.

He might just escape total vilification thanks to their 3-1 Spanish Cup final win over Getafe last week, but still - his coaching career finds a new nadir. If he's linked with your club, folks, protest vehemently immediately....!
Posted by LB at 9:35 am 1 comment:

Sorry they're so late, but here are this week's predictions:

Bottom of the table wildcards:

This Sunday, as it was twelve months ago, the Dutch Eredivisie title will be decided on the last day of the regular season. After some penultimate week drama (Ajax's away game at Groningen was postponed after a fire broke out in one of the stands before kick-off leading to several fans being hospitalised) and PSV failing to overcome FC Twente at the Philips Stadion, the 34th game of the season will again be decisive.

PSV are the firm favourites as they take a three point lead into the last day, but they face a tricky away tie at Vitesse (where Ajax lost a fortnight ago). Ajax face Heracles at the Amsterdam Arena with a five goal superior goal difference.

If PSV avoid defeat, they'll retain the title, if they lose, it's up to Ajax to win a straightforward home tie.

At the foot of the table, the one automatic relegation place is also a tightly fought contest between VVV and Excelsior. VVV are a point behind Excelsior but have a home fixture against struggling de Graafschaap, whilst Excelsior travel to Heerenveen. I'd personally be sad to see VVV go down, as they've played some good flowing football this season, and in Nordin Amrabat have one of the country's brightest young talents.

come on Ajax! I have no particular affiliation with the Dutch legends, but if they're the Arsenal of the Dutch league, PSV are the Chelsea - amazingly effective but not terribly interesting....
Posted by LB at 1:04 pm No comments:

Yet more proof that where CUAS lead, others follow.

Compare and contrast Ian's excellent contribution to "J" in the A-Z of Football with this piece from last week's Times.

Dear oh dear. Not just the Guardian nicking our content - now everyone's up to no good!

Hello all (numbers for this escapade seem to be diminishing of late....)

and showing at your local multiplex: 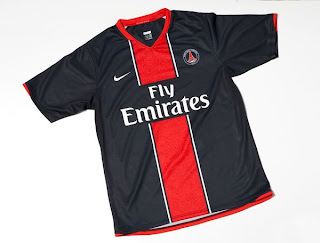 Despite their controversial injury time winner in last weeks French League Cup Final, the once mighty Paris Saint-Germain could be playing in next seasons UEFA Cup whilst languishing in the second tier of French football.

The famous club - one of the founder members of G14 - have had a tough few seasons in the shadow of regular champions Lyon. Despite some experienced management (current manager is Paul le Guen - tipped a few years back as one of the leading young coaches in the European game) and some reasonable quality players (French internationals Bernard Mendy, Peguy Luyindula, Mikael Landreau and Jerome Rothen plus Portuguese striker Pauleta, to name but a few), the past Cup Winners Cup winners have spent most of this season in the bottom half of the table.

Now, with six matches of the season remaining, PSG sit in the relegation zone of le Championnat in 18th position. It's tight down there - four teams sit on 35 points - but PSG have shown no sign in recent weeks of dragging themselves out of their perilous position, culminating in Saturday's 1-0 defeat at AS Nancy.

It's been a difficult year for some of Europe's most famous clubs. Deportivo la Coruna, Spanish champions as recently as 2000 have only recently dragged themselves out of the relegation mire they have been in for most of the season. Valencia - La Liga champions in 2002 and 2004 and Champions League/UEFA Cup finalists this decade - are slipping towards the drop zone at an alarming rate (they are 6 points off the drop with 7 games to go). AZ Alkmaar, pipped to the Eredivisie title last season on a dramatic last day are just safe from relegation. Parma, UEFA Cup winners in 1999 are one off the Serie A drop zone.

Whilst it's likely that these other former giants will live to fight another day, PSG have a mere six matches to save their Championnat status which, on current form, looks less and less likely as each week goes by.
Posted by LB at 12:51 pm 2 comments:

Well, we're on the predictions home straight. Due to the credit crunch/liquidity squeeze, I have no work to do and thusly and therefore the league tables have been updated! (woot. Something that I have learnt is that over a 3-4 week period, everyone scores roughly the same number of points.)

and wildcards from the Champions League

As I have written about before, I have been a fan of the Championship Manager/Football Manager franchise since, I reckon 1996. I'm a "plug and play" kind of manager - buy and sell, send your team out, hope for the best.

A few weeks ago, having absent mindedly signed up one day to the FM mailing list I was invited to be one of the few hundred participants in the Beta testing process for "Football Manager Live", the logical next progression for the FM series. I said I'd help, and I joined the "gameworld" in early February.

There are around 500 players worldwide in my particular "world". Whilst similar in look and idea to the offline version, there are clearly some significant differences - mainly of course that instead of playing a computer controlled side you are playing a living, breathing human somewhere in the world.

I'm not much good at it, to be fair. There are still loads of things I don't know about the game and the level of detail available is far more than I care about (I'm not all that bothered where my left back stands when defending a right wing corner, for example). The community aspect of it is brilliant, though - there is a "chat" facility during games and I have made a few online buddies in places as far afield as Holland, Ireland and Slovenia.

Making a few buddies also helps if you need to loan a player for a few days.....!!!

I also like the fact that you have to watch the game develop much more than in the offline version as people tweak their tactics - the whole experience is much more like actually being a manager and having to change formation, instructions etc as the game unfolds. For example, I've now developed two full thorough tactical formations (that took about two hours each to establish) - one which is my favourite and then a really defensive one I switch to if I am ahead with 25 minutes to go.

There have been bugs in the system and there remain some teething troubles but I can see FML being an enormous success when eventually launched. Whilst it is eating up my life like nothing has for years, I'll happily pay the subscription once launched....
Posted by LB at 12:04 pm 3 comments: