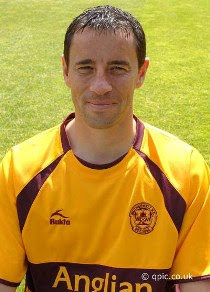 In these days where football is lauded as being more athletic, faster and more physically challenging than ever, the most serious and tragic repercussion of this is the number of player deaths.

Today saw the untimely and premature death of Motherwell captain and Scotland international Phil O'Donnell at the end of his clubs' 5-3 win over Dundee United.

2007 has, by my reckoning and according to this Wikipedia article, been the worst year in history for football player deaths and the 2000s the worst decade. A Brazilian, Cristiano Junior, the Zambian Chaswe Nsofwa, the young Spanish international Antonio Puerta and now O'Donnell have died during matches this year. This is on top of incidents such as Clive Clarke's collapse during the Forest v Leicester cup tie earlier this year.

Whilst the cause of this latest tragedy is as yet unknown, heart failure has accounted for the vast majority of similar cases (the exceptions being two Colombian players killed by being hit by bolts of lightning within three days of one another in 2004 ). Assuming medicine in football and general player care is better than it's ever been, is it the changing nature of the game that's responsible for this increase in fatalities?

Of course, days like this reinforce the fact that it's simply a stupid game of twenty two people kicking a ball about. The thoughts of everyone in the game should be with the Scotsman's family and friends tonight.
Posted by LB at 8:24 pm No comments:

Er, just to say that there won't be any predictions here until the New Year due to it being Christmas and there being 4.3 gazillion fixtures between now and then.

Let's hope Fabio wasn't watching Grand Slam Sunday, eh? (Grand Slam? Were there four major international tournaments in football on the same weekend just gone, then? I must have missed that....) Both games were cagey, kick-and-rush low-quality rubbish with two goals and practically zero skill. Contrast to the Eredivisie game a couple of weeks ago that was a brilliant Feyenoord 2-2 Ajax draw with goals, a red card, plenty of enthusiasm and no small level of talent.

Dutch football v English football? I'll take Roda Kerkrade every day (Raymond Attaveld off of Everton off of the early 90's is their manager, by the way. Ray Attaveld! I know!)
Posted by LB at 5:55 pm 4 comments:

wildcards from some of Fabio Capello's old clubs

(yes, I admit it.... I'm away from a computer for the next few days and wanted to get my predictions in early!)
Posted by swisslet at 1:15 pm 12 comments:

Gabriel Clarke off of ITV was running through the line-ups for tonight's Marseille v Liverpool match. In the kitchen, my wife was pottering around making the dinner.

"Did he just say there was a player called Jibberish Seaside?"
Posted by LB at 6:53 pm 1 comment: 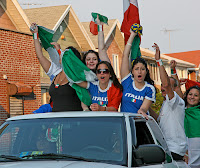 I'm excited today as I have done something I have only ever done twice before in eleven years of playing the Championship Manager series; I have won the World Cup.

After years as manager of AC Milan including two Champions League titles, I was invited to take over the reins of the Italian national side. Consecutive 3-0 friendly wins put the side in good form for the tournament, and then I sprung a surprise by selecting an uncapped keeper for the opening match.

The form in the group stage was poor - a 0-0 draw against Spain was followed by a narrow 2-1 victory over Saudi Arabia. A draw was enough in the final game and a 0-0 stalemate with the Ivory Coast secured qualification.

A confident 3-1 win over a talented French side and a straightforward 3-1 victory over the Uruguayans led to a semi-final showdown with Colombia. The first half was a cat and mouse affair and the sides went in 0-0 at the interval. However, a change in attacking focus and a team growing in belief brushed aside the South Americans in the second half recording a one-sided 4-0 victory with two goals from Antonino Lazzari.

The other semi-final saw the Czech Republic beat England on penalties (art imitating life) and so an all European final would decide the fate of the 2018 World Cup. I stuck with my trusted "first choice" eleven that had served me so well.

For an hour, it was a close affair with Italy slightly on top. On 63 minutes, Arturo Lupoli ran onto Catalano's excellent through ball, rounded Petr Cech and put Italy ahead. In an attempt to close out a win, I threw on three subs with ten minutes to go, but an injury time from Czech winger Petr Zavadil sent the tie into extra time. Neither side could find a winner and 1-1 was how it ended.

A nail-biting penalty shootout saw both teams score their first effort, before an amazing seven consecutive misses. It was left to Arsenal midfielder Michele Catalano to sidefoot an effort past Cech and to secure a 2-1 shootout win for the Italians, and a fifth World title.

The Italian FA were quick and lavish in their praise for me, as I joined the hall of fame of legendary Italian managers. And all that with only one of my "own" Milan players and half a starting eleven playing their football in the Premier League. That how it's going to be in a decade, you think....?
Posted by LB at 7:41 pm 8 comments:

[What a lovely fella Joey Barton is...]

and lets have a jaunt to the brilliant Eredivisie: 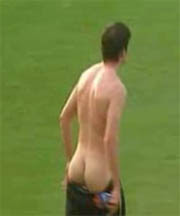 Over the past few years, Scouse idiot Joey Barton has had more than his fair share of tabloid press. In at attempt to try and launch some sort of charm offensive, the Newcastle United (and, lest we forget, England midfielder) agreed an interview with the toothless Gabby Logan on yesterday's "Inside Sport".

Barton has long been a perfect example to those who think that footballers are all overpaid layabouts with more money than sense. There have been other examples (Ashley Young's pre-match rituals are the most recent antics to hit the headlines) but there can't have been a more consistent idiot in the history of the Premier League.
Off the top of one's head, let's see. The stubbing out of a cigar in a team-mate's face. Being sent home of a pre-season tour for hitting a fifteen year old boy before a fight with his team-mate in a hotel bar. Breaking a pedestrian's leg in a car accident. Flashing his arse to a section of the Everton faithful after an away game. Arrest and an impending court case for ABH against a team-mate in a training session. Three cousins and one brother in prison on assorted assault, GBH and murder counts.
Nice fella, this one.
Eschewing a golden opportunity to present himself as a likeable scally, regretful and penitent, he spent the whole interview defending his actions and portraying himself as a victim of circumstance and of press focus. On more than one occasion, he could be heard complaining about the fact that the press pick on him over certain incidents which perhaps they wouldn't with other players. "I know it's becuase of my reputation", he says, without accepting in the slightest that his catalogue of immature and inane behaviour is exactly the thing that has generated this reputation in the first place.
Rather than presenting himself as a victim - an easy target for the tabloids - he could easily have started to rebuild or alter his well-earned reputation by being conciliatory, taking responsibility for his mistakes and being remorseful about them.
Instead, he defended himself and seems to be in some sort of delusional denial that he's ever done anything wrong. He's prepared to go to prison to defend the allegations that he assualted team-mate Ousmane Dabo, he did hit the 15 year old but it was all in self-defence, he bit Richard Dunne after Dunne tried to make him apologise to the boy and whilst the boys father was punching him. All completely innocent scenarios blown out of proportion by the tabloid press.
I didn't like Barton before, and I certainly don't like him now. I understand he is receiving counselling from Tony Adams' institute about his behaviour, but a leopard rarely changes his spots. Whatever he might claim, through a series of moronic and violent acts he has built a reputation for being a troublemaker, and if this weeks attack on his own home support is anything to go by, he isn't likely to change any time soon.
I know that the reality is that no-one in football really cares about morals, especially if you're a half decent player. As with a lot of professions, though, it is the actions of a small minority that cultivate the opinion of the profession as a whole. Being in financial services, I know this to be true more than most! In footballing terms, Barton can count himself as the chief protagonist in that minority. Why he can't learn from his mistakes, apologise for his idiocy and move on is beyond me.
Posted by LB at 10:55 am 4 comments: