Thank you once again to all of you who trot over here every week or so and input random numbers in the name of careful considered prediction. From Stoke to Sydney they come, and all of your input is much appreciated.

This years Predictions League was almost a foregone conclusion from early on, as last years winner Shane romped to a comfortable win and a retention of his title. Well done Shane!

A sterling effort from Swiss Toni took him to second, and well done also to Andy in third (who I believe scored the highest weekly total of the season). At the risk of being partisan for one brief moment, I am really, really quite nervous. Eleven hours to go.
*bites nails*
[some re-hashed memories of the last time this happened are here]
Posted by LB at 8:48 am 2 comments: 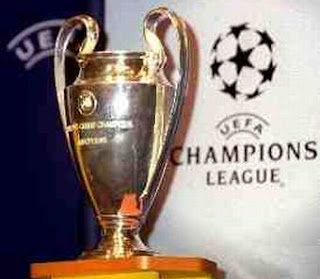 And so the European club football season moves towards its climax this Wednesday as England's very own Chelsea and Manchester United go head to head in the final of the 2007/8 Champions League.

Two teams from the same nation can't both be their league champions, can they?

I appreciate that this has happened before (in 2000 and 2003) and that the recent history of the Champions League is littered with winners and finalists who weren't the champions of their respective countries when they won the tournament. I also understand that there isn't a snowball chance in hell of this changing any time soon.

It just seems to defeat the whole object of a Champions Cup (which it effectively is) when the final can be between two clubs from one country.

Platini has the right idea by trying to open up the competition to more of the "lower ranked" countries. The beauty of a knockout competition is that there can be upsets along the way, but naturally the larger clubs want to keep these to a minimum (the league format will often see to that) otherwise they lose a great proportion of their precious television revenue.

Abolish the league stages, let the first round include every Champion from Bosnia to Belgium and remove the daft "you can't play someone from your own country" rule. Famously, Nottingham Forest beat reigning European champions Liverpool in the first round in 1979.

I don't much care how good an all English final is for the English game (all English clubs - a smattering of English players, of course on show) but I would like to say a Champion win the Champions League occasionally.
Posted by LB at 7:24 pm 2 comments:

Stewart Downing for Middlesbrough (vs Manchester City), 11 May 2008

Like millions of other people, I've been playing in a Fantasy Football league this year. Although I do play in a league with some friends in the Telegraph's game, the main focus of my attention, as usual, was the office "friends and enemies" league we have on FantasyLeague.com. It's a squad game, and you have to perm your 16 players in such a way as to maximise your points scoring opportunities. It's great fun.

After a terrible start, I had been behind the pace for most of the season, but as we came into the final round of fixtures, I was only a few points off the pace and in with a real shout. The last set of games in the Premier League, of course, are all played at the same time, so every manager had to choose what they thought was their strongest side and cross their fingers that they players they had been forced to leave out didn't play a blinder. I had some transfers left, so I was able to replace some of my benched players with the cheapest goalkeepers and could beef up my defence with the addition of Petr Cech and Paulo Ferreira. My hardest decision was who to play in my midfield. I felt that Bentley, Ronaldo and Ashley Young were all shoe-ins, but the final place was a toss up between Jimmy Bullard, whose game against Portsmouth meant everything to Fulham, and Stewart Downing, who would be playing in a nothing game against Manchester City.

Do I need to mention what happened next?

My side did well.... but my decision to play Jimmy "2 points" Bullard instead of Stewart "8 points" Downing cost me dear, and Bolton's late equaliser cost me a further 6 points.

In the final analysis, I lost by a single point.

To be fair, the winner had left Downing out of his side too, and when Bolton's goal cost him another 3 points, he thought that he'd blown it too. Little did he realise that Matty Taylor's goal had actually won him the title.

Incidentally, my mate who was second in the whole Telegraph Fantasy League competition with two weeks to go and £50,000 to play for.... he's now 18 points adrift with only the cup final to go. So close.... although his consolation prize is likely to be a couple of grand. I get a silver medal mousemat.

You will be pleased/relieved/delighted/distraught (* delete as applicable) to know that this is the final week of the CUAS 2007/8 Predictions League. Results to follow in due course.....

and its the penultimate day of the French season, don't you know? (PSG still in the bottom three with 2 games to go....)

You know that sometimes real life just ends up being a million times funnier than anything you can write?

I was enjoying a pint in the summer sunshine today with a couple of colleagues when half the Nottingham Forest first team rolled in and enjoyed some beers and lunch on the adjacent tables.

After they left, I went to pay the bill and I asked the manager jokingly whether the Forest lads had tipped them well.

"Yeah", he replied. "We get all sorts in here, you know. We had Titus Bramble in here yesterday."

As the season draws to a close, four teams deserve a CUAS pat on the back for their respective promotions. (Clearly there are many teams who deserve a pat on the back - in fact pretty much anyone who has been promoted with the exception of the Milton Keynes Dons who I still hope implode and disappear, never to be seen again).

Still, I'd like to indulge myself by selecting four, if I may.

Firstly, to the team whose ground is less than a mile as the row flies from my front door, and whose fans I could hear jubilantly singing at 4.55pm yesterday afternoon from my back garden, congratulations to Nottingham Forest who finally escaped from the third division on account of defeating Yeovil 3-2, but more thanks to Cheltenham Town's 2-1 win over Doncaster Rovers. It's great to see Forest back in the Championship and I sincerely hope they can consolidate their position next season. 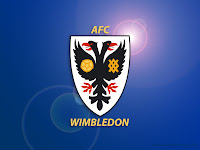 Secondly, and wholly appropriately in the season that fake franchise team the MK Dons achieved promotion, AFC Wimbledon escaped from the Ryman Premier League by beating Staines Town 2-1 in the play-off final. It's the Conference South for AFC next season, and I hope their eventual elevation to the Football League is achieved at the expense of their fake MK rivals.

Thirdly, and for no other reason than I drive past the Britannia Stadium an average of of ten times a month, congratulations to unfashionable Stoke City whose 0-0 draw against Leicester today not only relegated the Foxes to the third tier for the first time in their 124 year history but also secured promotion for the Potters after a 23 year absence. I like it when "new" teams reach the Premiership and I hope they do themselves proud. Similarly, good luck to the Cities of Hull and Bristol in the play-offs.

Finally, and from a personal perspective I'd like to congratulate FC United of Manchester who continued their meteoric rise through the divisions by winning the Unibond First Division North play-off final 4-1 against Skelmersdale Town. Next season sees them fight it out in the Unibond Premier which is where the real fight begins as that's not an easy division to get out of....
Posted by LB at 7:51 pm 6 comments:

and it's the Scottish League play-offs, don't you know?