The BBC today report that ex-Norwich winger Lee Croft is to join Derby County. A pretty run-of-the-mill football story, as they go.

What concerns me though is the picture of Croft that the BBC have used on their site. 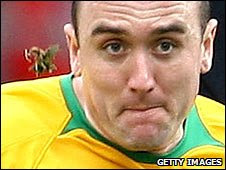 Is it me, or is the poor fella about to be attacked by the biggest flying insect Norwich has ever seen?
Posted by LB at 1:19 pm No comments: 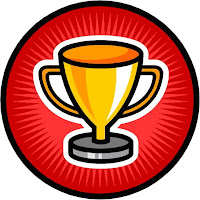 S, another season over and the fourth season of CUAS Predictions is complete. After wins for me in season 1, the title has finally been wrestled from Shane (winner in seasons 2 and 3). An excellent performance by Swiss Toni sees him take the title this season with 253 points. I was 15 points back in second, with Skif an excellent third, Andy a creditable fourth and the previous undisputed champion way back in 5th place.....

Weenie was 6th (a bonus 15 points for correctly predictiong the bottom three helped, there!).

Thanks again to everyone for playing, and we'll start the whole silly endeavour again in August.
Posted by LB at 9:57 pm 1 comment: 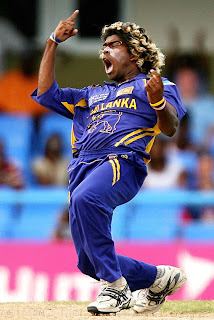 Due to my impending redundancy I spent a very relaxed and "bugger the work!" afternoon at Trent Bridge on Wednesday thanks to the generosity of a friend of mine who gave me a ticket.

I know this isn't even slightly football related, but can someone please explain to me how Lasith Malinga gets away with it?
Posted by LB at 12:08 pm 1 comment:

Were Manchester United beaten by a much better team on the night? Undoubtedly. Are Barcelona the best club side in the world, ever? No. The reality is somewhere in between - United could have defended better but Barcelona fully deserved their win, and are, I think, a popular winner of the tournament. I was also particularly encouraged by the magnanimity shown by Sir Alex after the match - not always apparent in the past.

And Chelsea were oaning about their pragmatic, organised football under Mourinho. Chelsea fans - be prepared for your team to be extremely effective but you be bored shitless for his tenure.

That their chance to win the league gone. do you think?

Dear oh dear. What a mess, there. At least 45 minutes against Aston Villa where they didn't seem to give a flying toss whether they were relagted or not rather sums it up for me. Bixzarrely, they were probably a better side than Hull but the Tigers victory at St James' ultimately decisive, I suppose.

Owen? sigh. What's going to happen there? Celtic? A decent job for a mid-table Premiership side? Abroad to salvage his career? Who knows?

Clearout, sign good Championship players and they'll make the play-offs next season. No demise of Leeds-esque proportions for the Magpies, methinks.

It's started already, hasn't it? I used to love the good old days when you got home and realised your team had signed a great player and it came like a bolt out of the blue. Now, Sky Skorts News and the Sun fill their content with endless transfer speculation until you're so desperate to make it all stop that by the time Frank Ribery signs for your club you'll be so pissed off with the whole endeavour that you won't care two hoots.

Predictions results imminent, and I am thinking of posting a weekly quiz of some sort. Woot. Hold the front page....
Posted by LB at 8:43 pm 1 comment: