Anyone want to come to Notts County with me tomorrow? You'd have to sit in the away end as they are playing my beloved Bury in a game of vital mid table mediocrity. Anyone? No?

and some Derby wildcards, including of course the big Derby derby this weekend...)

There's not much going on, football-wise, is there? A takeover of Charlton Athletic has fallen through? *yawns*

Anyway, I have updated the predictions table. Stewards enquiry for ST's score, I think....

and some wildcards from the Homecoming Scottish Cup (whatever the f*** that is!)

Brora 1-3 Forfar
Clachnacuddin 1-1 Crichton
Forres Mechanics 2-1 Keith (I always think he does a really good job, Keith. Someone should sign him, I reckon. And Barry Town, as well.)
Posted by LB at 12:09 pm 8 comments:

Hello - I promise I will update the table in due course. Credit crunch, innit.

and some wildcards from the Irn-Bru League

A propos nothing in particular, I received this comment on an old CUAS post the other week. It's so beautifully random and non-football, I couldn't help but share it.

Thanks for my rolex.x ps you were terrible in bed and have a white sized willy.

Sigh. I can't believe the ingratitude of today's women. They'll take your Rolex and then criticize the size of your member, on tinternet where all can see.

I was going to wrote about Joe Kinnear's hilarious rant but then he galvanised a dishevelled Newcastle into coming back from 2-0 down to steal a draw with (thus far incredibly disappointing) Everton.  I also heard a grest story that when he was appointed as Nottingham Forest manager, he was late for the press conference as he "couldn't find the City Ground" (despite having been there on countless occasions as an away manager).  In the end, the club had to turn the floodlights on in order that he could find the place....
International Weekend again.  Anyone care?  No?  Thought not.
Bulgaria 1-1 Italy
England 3-0 Kazakhstan (My name-a Borat. Is nice!)
Estonia 0-1 Spain
Germany 1-1 Russia
Holland 2-0 Iceland (or the New Russian State of Iceland, should you prefer)
Poland 2-1 Czech Republic
Romania 1-1 France
Scotland 0-0 Norway
Sweden 2-1 Portugal
Ukraine 2-1 Croatia
and wildcards featuring clubs off of "not their original name, like"
MK Dons 1-2 Carlisle
Macclesfield Town 1-2 Aldershot
Kidderminster 2-0 Ebbsfleet United
[Not sure what's happened to the formatting here. Blame Blogger!]
Posted by LB at 5:01 pm 8 comments:

As we drove past a misty Meadow Lane at 10.45am on Saturday morning, the small child person looked at it and suggested that we might perhaps go to a football match later that day.

A quick check of the fixture list later, we spent the afternoon in the Family Stand at Notts County v Aldershot. We had quite a good time - County won 2-1, we had some crisps and a hot chocolate, got a sticker to promote a new Football League drive and sat in the sunshine paying tribute to Jimmy Sirrel and watching County fluke a narrow win. 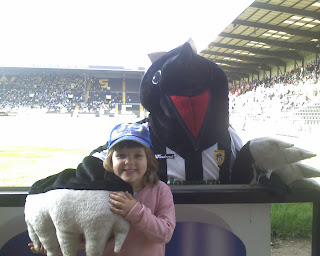 And you can't beat a huge hug from a Magpie, can you? (unless it's Mark Viduka of course. Ha ha ha.)

and some Rangers wildcards: