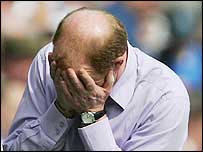 So today, after a disappointing season, Gary Megson parted company with Nottingham Forest.

Not only did Megson fail to keep Forest in the Championship, defeat last night to Oldham Athletic leaves the double European Champions four points off the drop zone to League Two.

Megson came to Forest with a reputation for ugly but effective football having achieved some success on a limited budget with his previous club West Brom. He was also apparently the best paid manager outside the Premiership. But, 17 wins in 59 games after spending £1.2million (a small fortune for a third division side) was simply not good enough, especially when the expectation was that Forest would bounce straight back into the Championship.

With absolutely no disrespect to these clubs, look who is ahead of Forest in the table. Colchester. Brentford. Doncaster Rovers. Chesterfield.

So, Nigel Doughty is looking for his fourth manager in three years. Will he turn to his friend Glenn Hoddle, himself under pressure after a disappointing season with Wolves? Paul Hart for the rest of the season? Would Nigel Clough want the job? Claudio Ranieri? Martin O'Neill? Paul Merson? Gazza? Who would you choose?

I'd welcome Hartey back anyday - only problem Doughty doesn't like him

Hoddle, Souness, Merson - No thanks I'd rather have Pratt back in charge

Pearce or O'Neill would manage us if I was writing the script - but if that was the case we wouldn't be moving towards lge 2.

Laws, Penney, Mowbray(unlikely I know) - all would be OK by me.

The most important thing is Megson's gone!

Can't see Nigel Clough wanting to go anywhere near it, and I certainly hope he doesn't.

From reports yesterday, I got the impression that Hart was looking like a plausible candidate.

The lack of impact of Megson's January spending did seem bizarre.

As Dom says, NO Souness or Merson. Nige would be nice, but I think he's having too much fun and enjoyment at the Brewers.

In reality, I think we might end up with someone like Dave Penny, come the end of the season. I've pretty much written off this season (I did when I watched the terrible performance at the Franchise the other week).

One thing scares me though. A future which holds Ian McParland as the interim manager for the rest of this season is horrible.