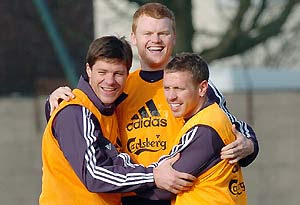 "with a little understanding / you can find the perfect blend...."

During a gap in the fixtures list, a team of footballers go to the continent for a short break in the sun. A spot of light training, perhaps some golf, a bit of team bonding... perhaps a drink or two...... you know the rest, right?

When I read about Craig Bellamy's alleged assault on John Arne-Riise with a golf club over a perceived slight at the karaoke, I couldn't help but think that I've seen it all before. Even the names of the footballers seemed to be predictable: Robbie Fowler, Jermaine Pennant and Craig Bellamy. If you had to pick the three members of the Liverpool squad most likely to be involved in something like this, I reckon you'd come up with them.

Yeah, I heard the hotel manager on the radio this morning saying that reports of the fracas had been much exagerrated. Yeah, I heard Rafa Benitez trying to play the whole affair down. It's clear that something happened though: a bunch of young men went out on the lash and were unable to stop themselves from letting things get out of hand. You might say that I don't know the facts, that the media have blown this all out of proportion, that this would probably be true of any group of lads out in a resort like this and having a few drinks... and you'd probably be right.... but most groups of lads having a rowdy night out on the tiles are not paid £80, 000 a week; they are not professional athletes; they do not have a crucial game against the European Champions later on this week.

What's wrong with these people? Let's look at Bellamy:

November 2006 Bellamy cleared of assaulting teenage girl in a nightclub

I could just as easily have picked Jermaine Pennant, and you would have seen a similar tale.

From zeroes to Heroes! Reds triumph over cheating Barca scum!

Got that off me chest, feel better now! :)

two goals and they had to be the scorers, didn't they!?

bellamy's career is filled horrors and rewards.he makes a great mistake and then compensates by doing a wonder.
this is what had happened this time too.He made a idotic at the club and then corrected it by scoring against barca

the Guardian have kindly made Bellamy their top footballing tosspot as well....