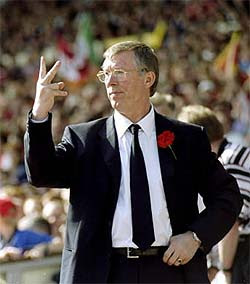 Seven years after Roy Keane's famous "prawn sandwiches" rant, Fergie's been at it this time, comparing the atmosphere at yesterdays United game to "a funeral". Accusing the supporters of "letting down the team", Fergie continued by saying "It was so quiet....I don't think that helped us. The players need the crowd sometimes but the atmosphere inside the ground wasn't good."

Can no-one at United put two and two together and work out what some of us have been telling them for years?

I read with interest your comments pursuant to the United v Birmingham match on New Years Day where you criticise the home crowd for their lack of support during the game.

Rather than taking out your frustration at a limp performance on the fans, I think it would be prudent to consider the overriding reasons why the atmosphere in the ground may be less vocal than in recent years.

The pricing policy of the Club over recent seasons, culminating in a 15% increase in season ticket prices and the implementation of the hated "automatic cup ticketing scheme" have been the straw that broke the camels back for thousands of loyal, dedicated United supporters. The season ticket renewal rate amongst loyal supporters has been lower this season than for many, many years and the Club has managed to successfully drive away a great swathe of its long-term support in favour of itinerant corporate supporters.

With the best will in the world it is the fans brought up with the club - my mother and I cancelled our season tickets in protest this season after a combined eighty odd years support - that are the vocal, enthusiastic supporters at games. A series of carefully considered policies at Board level has contributed to the decline in the Club's "everyman" support. By focusing on those more able to afford expensive ticket prices and on corporate guests, it follows that these customers (as I believe we should call them these days) are going to have a very different experience at a home United game than the loyal fan they replace.

I can't believe that you can be naive enough to ignore the Club's gradual alienation of it's core support as a contributing factor to the lack of atmosphere. By all means claim this as a reason, but then direct your vitriol at the Board members who implement and maintain these policies as they are the ones who prefer the £40 plus from irregular "football tourists" than the cash of the United faithful. Any corporate guests or Japanese tourists know the words to "We are the pride of all Europe...."? No, I didn't think so.

It's going bloody mad, football. It really is.

In a domestic sense, I'm probably a football tourist. Father-in-law and self have determined that the best way to see his beloved Arsenal is to not jump and pay through umpteen hoops to get seats at the Emirates, but to wait until they're playing at grounds that are within striking distance from us - Blackburn, Wigan, Bolton, Birmingham, Villa, etc (though Villa refused us tickets this season as they spotted that our 'history' was of only buying tickets for the Arsenal games - well sleuthed, Villa).

On the atmosphere and Old Trafford: the first time that I went there (98/99), I was stunned at how quite almost 70,000 people could be. It so struck me, that I wrote a small piece on it for a local newspaper. It didn't prove to be a seminal piece in football journalism. I think Fergie's comment is something that will be recognisable to a lot of people, though it's good that you raise the broader issue of the high and multiple demands that are placed on MU's supporters, or pawns. [Book Suggestion - From Pawns to Prawns: Manchester United Supporters in the Third Millenia]

As for atmosphere elsewhere, as a general rule, the busier small grounds are what appeal to me: Stafford Rangers versus Burton Albion on Boxing Day was the highlight of the holiday period.

I pretty much thought the same when I read the related articles. NUFC is pretty much in the same boat, though thankfully we're not being monetarily skinned to such a degree as the MUFC lot.

I don't have a season ticket at Newcastle any more for several reasons - being out of the country for 2 years is just one - but before I left I can tell you that the atmosphere sucked.

It's not like the money's any good for the football either. I can't remember the last game I really *enjoyed* at St James'. There's a line (not a fine one) between devotion and being taken for a ride. I wasn't paying several hundred quid a season to watch crap football.

As for the Man U noise factor thing, I went to the FA Cup semi-final a few years back in Cardiff where we got walloped by them. The Man U fans made noise exactly six times - all four goals, half time whistle, full time whistle. The rest of the time they may as well not have been there - they were *rubbish*. If you base teams deserving a win on fan support then we should have walked out of there having crushed you by double-figures.

Not bitter at all. And not as annoyed as I was driving to Norwich the week after to get beaten 1-0 by relegation-fodder. Again.