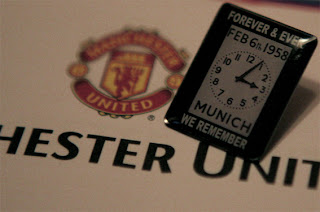 Exactly fifty years ago today, a British European Airways "Elizabethan" class airliner stopped to refuel at Munich's Riem airport. At 14.19 hours Captain James Thain was given permission clearance for take-off, and at 14.30 hours the plane was on the move. Forty seconds later, it was at a halt after pilot Captain Ken Rayment abandoned the take-off.
At 14.34 hours, clearance for take-off was given for a second time and forty seconds later the plane was at a halt again. The Elizabethan was guided back to the airport buildings and the passengers informed there had been a "technical fault". Discussions with the station engineer took place and procedures to counter the problems with the engines "boost surging" were provided.
At 14.56 hours, Captain Rayment requested permission to taxi to the runway and at six seconds past 15.03 hours, the plane was rolling.
According to the official record: "The last message from 609 Zulu Uniform starts with a howling, whistling noise and ends with a loud background noise after the message was broken off". 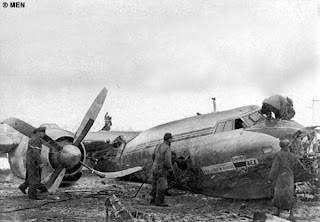 Due to the quantity of slush on the runway (a cause that it took the pilot eleven years to prove) the aircraft failed to take off. The Elizabethan crashed through a fence and crossed a road before the port wing hit a house. The wing and tail were torn off and the house caught fire. The starboard side of the fuselage hit a wooden hut where there was a truck filled with tyres and fuel.
It was 15.04 hours, 6th February 1958.
Twenty-three of the Elizabethan's forty-four passengers died as a result of the crash. Amongst them were eight journalists (including former Manchester City and England goalkeeper Frank Swift), two crew members, a travel agent and a supporter. Three of the Manchester United club staff were killed - secretary Walter Crickmer, trainer Tom Curry and coach Bert Whalley. 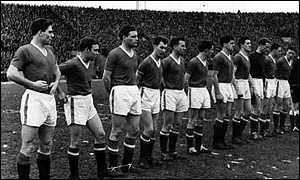 The Munich Air Disaster, as it has become known, also claimed the lives of eight of the "Busby Babes". Geoffrey Bent, Eddie Colman and Mark Jones made 224 United league appearances between them. Roger Byrne, David Pegg and Tommy Taylor were full England internationals with a total of 53 caps. Liam "Billy" Whelan won four caps as a full Republic of Ireland international. Most famously, I suppose, was the loss of Duncan Edwards, generally regarded by those who saw him as the best England footballer of all time. Edwards won 18 England caps.
Two further internationals - Northern Ireland's Jackie Blanchflower and England's Johnny Berry suffered injuries which prevented them from playing football again.
The football world of 1958 was a different place to today. There were no deep-seated club rivalries in those days, no hatred of opponents or players. United in those days were respected for their brand of expansive, attacking football ("get them off their seats", Busby used to tell them) and so the loss of nearly a whole XI of both club and international players devastated not only the city, but also the football community as a whole.
The Munich disaster happened a decade and a half before my birth. I've never seen these players in action, save for titbits of video footage and I only have recollections from their peers as to their talents and character. However, Munich is interwoven into the fabric of the club I have followed since I was born a mile from where I used to stand in the late 80s.
Saying that, my mother and I have been trying to donate an item of Munich "history" to the Manchester United museum for over a decade now and the club to no avail. After the disaster, the surgeons and medical staff from the Rechts der Isar Hospital in Munich were invited to a civic reception at Stretford Town Hall to thank them for their efforts. My grandmother was working at the Town Hall in 1958 and has an invitation to the event signed by the German medical staff. I have twice approached the club to offer this half century old item for loan and display in the museum but both times the club have shown absolutely no interest. I have to admit to finding that slightly odd, especially in light of the huge lengths the Club have gone to in recent months to organise a carefully planned series of commemorations this week. Perhaps I should offer again whilst sentiment is high...
Since Princess Diana's premature death, the British desire to be involved in the grief of others has resulted in a macabre outbreak of what others have termed "mourning sickness". Whilst I find this somewhat disturbing, even discounting the fact that this tragedy happened to "my club" I think that a commemoration of a day that affected everyone within football is appropriate. I sincerely hope that tribal rivalries can be put aside for one day to respect not only the players who perished, but also the countless others whose lives were taken or irreperably affected by this dreadful event.
Posted by LB at 7:40 am

I watched tonights England game in a busy pub in Jersey (don't ask).

As the moment approached for the minutes silence, I stood, along with my two colleagues.

Almost as one, everyone else in the pub stood, and the silence was observed with the same polite respect as everyone in Wembley.

they cut the silence short at Wembley, I thought.... it was pretty well maintained, but some morons were just starting to shout / whistle.

...not that I'm trying to undermine your recently restored faith in human nature.

I think the item that your grandmother passed on sounds like a real treasure. Without wishing to sound tacky or overly dramatic, a short email note to a local (Manc.) paper may bump the club into a positive response, or even a short letter to the German embassy - outlining the story and inviting them to encourage the club into expressing an interest.

Glad the Jersey response was warm. I have a feeling that alcohol will be the major factor that determines whether the weekend's minute of silence is respected. My heart says all will be well, my head is not so sure.

You're right, Swiss - it did seem very short.