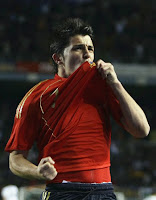 I know we shouldn't be surprised by the pundits on the BBC talking absolute nonsense, but Spain's penalty shootout triumph over Italy last night was twice referred to as "a victory for football".

I can see what they are getting at - Spain played almost all of the expansive attacking football when compared to Italy's defensive minded approach - but a vacuous soundbite of that stature surely can't go unpunished?

The whole point of football (and, some would argue especially international football) is that it pitches different styles and mentalities against one another. Italy are the second most successful international team in world football history and their success has, as a generalisation, been built on defensive knowhow coupled with a plethora of attacking talents. The Italian game is defined as careful, possession-led, organised and, I suppose, somehow stylish.

If, as Gary Lineker would have you believe, that Spain's win was "a victory for football" then we ought to be seeing Brazil win every World Cup from now on. Real Madrid would presumably be the European Champions every year and Arsenal would win the Premier League. The fact remains is that it doesn't work like that. History is litterered with triumps borne from tactical knowhow and organisation (think Greece in 2004), home advantage (think England in 1966) and, on occasions, luck (think Germany in 1996).

Teams who adopt defensive strategies that play to their strengths are as valid and as important to the game as those carefree attacking sides. Whether they are as easy on the eye is a different matter entirely, but they should not be criticised for adopting an approach within the rules of the game that suits their priorities. If I admire the organisation and defensive style of the Italians and the quality of their world-class goalkeeper (which I do), their frustration of a talented Spanish side for 120 minutes is as much of a "victory for football" as any.
Posted by LB at 12:01 pm

Interesting take on it. I agree that most tactics when executed well should be recognized and at times commended. The Italians team defense yesterday was a clear example of that. What I think many, including myself were frustrated with was the incessant diving by one Italian (Luca Toni) that kept causing stoppages. It was a joke. 10 opportunities 10 dives, not a single dribble completed, it was if his go to move was to let the ball by him and feign Eduardo-like symptoms upon the slightest graze. admittedly, David Villa was guilty of a similar antics as he dove 4 or 5 times, but at least he had a number of decent runs, a few brilliant passes and a couple of opportunities where he looked generally interested in putting the ball in the net, whereas Toni and a few of his peers were more interested in the whereabouts of Marco senna's boot than the ball. All in all it was a great match for true soccer fans, strong goal keeping on both sides, consistent refereeing (consistently horrible), and more ammunition for my argument against shootouts.

Nice spin madvillain but I think your bias against the Italian team was quite evident. The Spanish team were the main (Villa in particular) perpetrators of the dive because they couldn't solve the Azzuri attack. And who really cares what the English think anyway, when is the last time they actually won an important game against a nation of world class skill.

The bottom line is the style of football played against Spain is what won Brazil a World Cup in 2002 (remember the comments of Pele pre-tournament 'boring' I believe was used.) and even the UEFA Champions League saw the beloved English giants Manchester United win with an extremely defensive style game (the counter attack was in full effect).

Essentially those who cry fowl with Italy, just don't know how they do it. Its a secret only they have, and the world wishes to crack. So Alan Shearer - enjoy your fruitless career that saw you fail miserably with 'exciting football'. And Cannavaro and company can enjoy their fourth world cup for another 2 years. Peace.

We English would love a national team as boringly successful in knockout tournaments as Italy.... no matter what style of football they play. None of that cobblers spouted by Newcastle fans about preferring to lose each game in a thrilling 4-3 defeat than grinding out a 1-0 win. No wonder they never win anything.