Even though it's only the third week of the New Year there are European leagues whose titles and glory have already been decided, and it is fair to say that it has been the year of the underdog. Bearing in mind the relative uncompetitiveness of the major European leagues (in terms of who wins them) these four leagues had the most amazing seasons......

Sweden
After a nailbiting finish to the 2007 Allsvenskan league season, 2008 had another similarly tense denouement. Last season's champions Gothenburg could only manage a 3rd place finish (ten points off the pace) and so the title once again went down to the final day of the season.

2006 Champions Elfsborg ended up falling agonisingly short and the title went to last years runners-up Kalmar FF. Remarkably, it is Kalmar's first ever league title and they were only prevented from a historic double by a penalty shootout defeat to Gothenburg in the Svenska Cup final. Their success is even more astonishing considering that the club were in the second tier of Swedish football as recently as 2003.

With nine different winners since 1997, the Allsvenskan remains one of Europe's most interesting and competitive leagues. 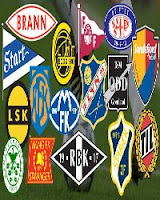 Norway
It was pretty much a complete changing of the guard in Norway this season. After the joy last year of their first league title since 1963 Brann had a disappointing season finishing in a lowly eighth place, twenty-one points off the Championship pace. Rosenborg's relative decline continued also, as having won fifteen of the previous seventeen league titles they could only manage to match 2007's disappointing fifth place.

Third in 2007, Viking could only finish sixth, and the fourth place team in 2007, Lillestrom, finished a place above the relegation play-offs losing their management along the way (replacing them with ex Manchester United defender Henning Berg.)

It was therefore to be another Scandinavian fairytale as Stabaek clinched their first ever league title with their 6-2 victory over Valerenga in the penultimate match of the season. Unfashionable Frederikstad were second, Tromso third and newly promoted Bodo/Glimt finished an excellent fourth just two points off a Europa League spot.

2005 champions Valerenga were victorious in the Cup and claim the final Europa League place.

Russia
An unprecedented hat-trick of "first time league winners" was completed in the Russian Premier League. Unfancied FC Rubin Kazan from the Tatarstan Republic (only promoted to the top flight in 2003) won the Russian title on matchday 27. Wagner Love's 20 goals propelled CSKA Moscow into second place with Dinamo Moscow in third.

UEFA Cup and Super Cup winners Zenit St Petersburg could only finish in fifth place despite spending a cool €30 million on Danny, the most expensive player in Russian football history. This means they fail to qualify for the Champions League in 2009/10.

Interestingly (and somewhat bizarrely), Rubin's players were completely absent from the Russian Football Unions's "best league XI" announced at the end of the season. Zenit managed five players despite scraping into a European spot on goal difference and the team above them (Amkar Perm) also saw none of its players recognised....

Finland
To complete an amazing sequence in the "summer leagues" of European football, Finland also, incredibly, had a "first time" league winner in 2008.

Founded as recently as 1990, FC Inter are based in the Finnish city of Turku, the country's fifth largest. Having never achieved a league finish higher than fourth, the small team (ground capacity of 9,000) beat FF Jaro in their final game of the season to take the title by four points.

Inter were pushed to the line by the fantastically names FC Honka who will be joined in the Europa Leage by FC Lahti and HJK Helsinki.

It was a bad season for last years top teams - champions Tampere United could only finish eight with their main rivals FC Haka one place below them.