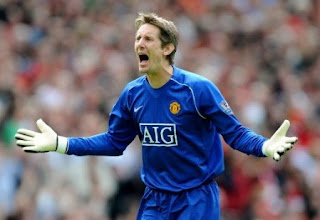 Whether you like them or not, congratulations go to Manchester United and specifically their Dutch international goalkeeper who broke a longstanding English record on Saturday.

It has now been an astonishing 1,104 minutes since Edwin van der Sar picked the ball out of his net eclipsing the record set by the fantastically named Steve Death during the 1978-9 season.

It is a particular testament to the veteran keeper that he has done this behind a regularly changing defence, with the back four having variously included Nemanja Vidic, Gary Neville, Rafael da Silva, John O'Shea, Patrice Evra, Wes Brown and Jonny Evans during this run.

If van der Sar keeps West Ham at bay for 75 minutes at Upton Park on Sunday he will beat the current British record (held by Rangers' Chris Woods). A clean sheet against the Hammers will then mean that if the Dutchmen gets to the 65th minute against Fulham next Wednesday night without conceding he will beat the world record (currently held by Atletic Madrid's Abel Renso).

van der Sar has had a terrific career. He is Holland's most capped player and was the first non-Italian to keep goal for Juventus. He is also one of the few players to win the Champions League with two clubs, picking up winners medals with Ajax in 1995 and Manchester United in 2008. He has also won a UEFA Cup winners medal and six league titles with United and Ajax.

Many records have fallen during the Ferguson era, and for a team who have receive regular plaudits over the years for their fine attacking football it must be of great satisfaction to Ferguson that his side are also record-breakers for their defensive achievements. A model professional, I hope van der Sar makes it through the next couple of games with his luck intact as it would be a tremendous crowning achievement to a fantastic career.
Posted by LB at 8:47 pm