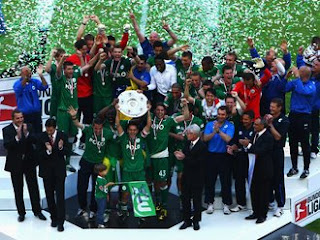 In a season of unusual league winners (Finland, Norway, Sweden, Russia getting "first" league winners, AZ winning in Holland) we can add another to the list as unfancied Wolfsburg took their first ever Bundesliga title on Saturday after a 5-1 demolition of Werder Bremen. Winning an unprecedented 14 out of their 17 games after the winter break, Felix Magath's side (although it is no longer Felix Magath's side as he's off to Schalke) take the title for the first time in their 64 year history.
Bayern Munich were second and take a Champions League spot and Stuttgart finished third (they go into the Champions League quaklifying round). Hertha were a very creditable fourth and Hamburg finished fifth.
Armenia Bielefeld and Karksruhe are relegated, whilst Cottbus play Nurnberg to decide the final promotion/relegation place.
Posted by LB at 12:57 pm