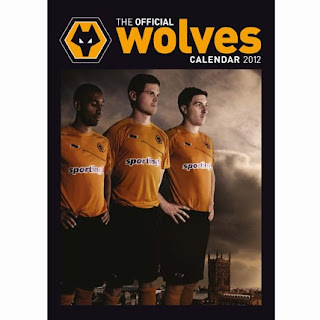 Much to my wife's delight, our kitchen calendar next year will be the Official Wolverhampton Wanderers FC Calendar for 2012.

I don't know what it's like in your house, but in ours, the kitchen calendar is the source of all knowledge: if it's not in the calendar, then it's not happening.  For the next twelve months, we will be planning and mapping out our lives next to photos of some real Old Gold heroes.  As a sort-of closet Gooner, this will no doubt pain my wife.  Also, our strip no doubt clashes with the daffodil yellow we've apparently painted our kitchen with.....

Of course, the big risk with a calendar like this is that you could get to October and spend all month reliving your bitterness about the fact that you're going to be looking at a picture of a Kevin Doyle who actually left the club in the January transfer window.... but I suppose that's a risk you're just going to have to take.

Things already aren't looking all that great for January's poster boy: Roger Johnson was our big summer signing, but he's just been dropped from the side in favour of a 36 year old Jody Craddock (who hasn't been given a page this year at all, but as a club legend should probably get one every year, right?  Steve Bull should probably always be in there somewhere too.  Maybe John de Wolf too.  Andy Mutch, perhaps?  Robbie Dennison? Mick Stowell?  Bugger the current lot, let's stick to the classics).

Do you think that the players at clubs across the country reach nervously for their copies of the official club calendar as soon as it's printed to see if they've been included?  If you've been left out, then what does that say about your future at the club?  Or if you're desperate to leave, what if you've been put on December?  Is that the equivalent of issuing a "hands off!" statement to other clubs in Football Manager?

Do manager's insist on copy approval?  Maybe they should.  ("Karl Henry for November?  If he's still playing for us then, then we really will be fucked!")
Posted by swisslet at 7:13 pm

I think that it is a great idea to do a Calendar and the design is quite good.