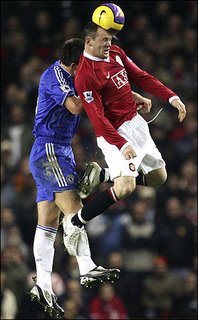 So, the Premiership's two contenders (sorry Bolton fans, I don't think you'll win it) met yesterday at Old Trafford and, at the risk of being cliched, it was a game of two halves.

When the final whistle blew, the bottom line was that you couldn't so much as put a cigarette paper between the two sides. United dominated and controlled the first half and Chelsea the second. Mourinho was right (as he increasingly rarely is) by claiming that it was a better result for Chelsea than United. The fact remains that United have played Chelsea, Arsenal and Liverpool at home (one win, one draw, one defeat) wheareas Chelsea have those games to come.

I also thought that the respective substitutes benches told a tale. If United suffer an injury or suspension to, say, Ronaldo, Rooney or Saha, we are going to be pretty knackered. Yesterdays bench - your options against the Champions - Wes Brown, John O'Shea, Mikael Silvestre and Darren Fletcher. Chelsea brought on both Arjen Robben and Joe Cole.

So, a fair result. I know we have talked about Chelsea before, but Peter Kenyon's assertion that Chelsea are on course to be "the biggest club in the world" ought to be treated with the derision it deserves. Sure, in ten years they may have the biggest income or turnover (or however Deloitte and Touche measure these things) but that is absolutely nothing to do with being a big club. Being a big club involves having a history, a tradition, a style. I could name lots and lots of "bigger" clubs than Chelsea off the top of my head. How about Liverpool. Everton. Aston Villa. Nottingham Forest (Chelsea have 25,000 turn up in the third division? I sincerely doubt it). Rangers. Wolves (three league titles also) but with a significant history.

The biggest club in the world? Do me a favour. They're not the biggest club in London. Watching Chelsea yesterday, it occurred to me that they are the football equivalent of watching Pete Sampras. They are mercilessly efficient and clinical, technically brilliant, should be lauded for their success but you watch the crowds flock to watch Andre Agassi on the adjacent court. I'm not suggesting United are the Agassi (a case for Arsenal, surely) but we are maybe the Boris Becker. Initially loathed, successful on occasion and increasingly likeable in the later years.

And, finally, I hate Didier Drogba and Ashley Cole. Drogba is everything about football I despise - for a big burly fella he does find himself lying on the pitch a lot of the time. And, of course, play is stopped, the physio and stretcher is brought on and then he miraculously recovers. He is tetchy, petty and looking for trouble. Considering this season he has proved that he is a talented player, he is doing himself no favours.

And Ashley Cole? Dear oh dear. I did enjoy calling him a "w*nker"and his wife a "Geordie slag" for forty five minutes, though....

When the game was on it was a case of supporting the lesser of two evils, and I admit it, I wanted Man Utd to win, just to f**k off the Chelsea scum.

I'm surrounded by Manc fans so cheered when the mobsters got their equaliser.

Greatest team? They're a fad, see how many supporters they get if they ever find themselves in a rut...

They win stuff though, so perhaps a better comparison would be Ivan Lendl. He won stuff, lots of stuff, but he was widely disliked and he doesn't make it into the pantheon of all time greats either.

lendl turned out to be quite likeable when he stopped playing. I wonder if we'll like Chelsea more when they stop winning. It certainly seems to have worked for Manchester Utd. Them not winning stuff appears to have given people a whole new perspective on their tradition and on their achievements.