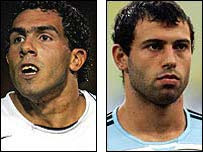 So, West Ham United have been charged by the Premier League regarding the signings of Argentinian duo Carlos Tevez and Javier Mascherano. The charge relates to irregularities regarding the third party ownership of the players with Media Sports Investment.

What amuses me today, however, is their possible penalty. Arriving in August fresh from an excellent showing in the World Cup, the transfers were seen as one of the biggest transfer coups in the games history. Two seasoned world-class South American internationals signing for West Ham United.

Non-league side AFC Wimbledon are currently facing an eighteen point penalty for fielding ex-Wimbledon (!) player Jermaine Darlington without the requisite international clearance (there is an excellent article about AFC's plight here). He played eleven times for AFC Wimbledon and their penalty for a complete administrative oversight is deduction of the 18 points gained during those games.

West Ham's possible penalty for the fifteen or so games they fielded seasoned Argentinian internationals without the correct registration?

It was hardly worth it, was it?

No, it doesn't seem fair but the Hammers are going down anyway and maybe it's like rubbing salt in the wound?

This is just typical of the way the FA hands out fines and penalties.

Are all the teams not equal in the eyes of the FA? Obviously not. But in other situations the penalties are too similar for completely different circumstances such as 'violent conduct', taking no consideration of the motives or the actual severity and difference between a punch and a push.

I think the Hammers are going down anyway too, but still....

I've just read the AFC Wimbledon article too and it's shocking.

The FA go on about promoting grassroots football, and this is exactly where AFC have come from. How must the club and fan's feel to be persecuted like this?