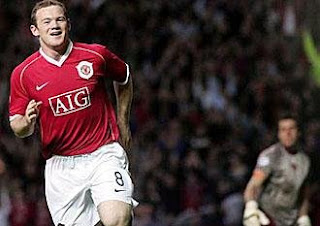 I have been lucky enough to see some great United performances in my twenty odd years of going to Old Trafford. And whilst we've put six or seven goals past the likes of Barnsley and West Ham (and even Arsenal on occasion), I'm not sure I have ever seen anything quite like last night.

This is a Roma side with only two defeats in their previous 22 matches and who eliminated five times French champions Lyon in the previous round. Inter's nearest challengers for the Serie A title. With respect to the great Premiership Barnsley side, Roma are in a very different class.

And yet, that is probably the most exhilerating attacking performance I can remember seeing. I don't even think that Roma were particularly poor (although their keeper didn't look that stunning) but I think they just couldn't live with the effervescent and high-tempo game that United played. United's biggest win in Europe for forty years, the biggest winning margin in the European Cup at this stage since 1958 and a result that equalled the biggest ever European win at Old Trafford.

It's one of those incomprehensible results. A good Italian side defending a lead, United with a makeshift eleven (Darren Fletcher, I thought, was particularly impressive), a forward returning after 18 months out injured, the fact United have not overturned a first leg deficit in the Champions League in five attempts, their frankly poor form in Europe, the lack of goals from Ronaldo and Rooney - the list goes on. And yet here we are today applauding a magnificent 7-1 triumph.

I particularly loved the moment in the first half when we were 3-0 up with about 20 minutes to go until half time. Giggs had misplaced a couple of passses to gift Roma possession and the guy next to me turned to his mate and sighed. "We've gone all shit again", he complained. At 3-0 up. After 25 minutes. Of the European Cup Quarter Final.

I thought Roma could've turned the tables when they got their goal to make it 6-1! *joke*

Adem - I only stopped turning to my mum and asking how many Roma had to score to level the tie when it went to 5-0....

One of my favourite players in the world is Francesco Totti. I love the fact that he is roman to the core, that he has a tattoo of a roman legionary on his arm and that he apparently won't consider playing for anyone else. I love that he is widely considered thick because of his roman accent, and so he has published a couple of joke books (all with the basic punchline that Totti is stupid) in aid of UNICEF. He has also filmed several of those jokes as sketches with some of his Italian team mates. He sounds like a really nice guy.

And yet....and yet.... can anyone remember him turning up for a really important game and putting in a performance? (and yeah, I know he scored a couple of crucial penalties for Italy, but he did so in the midst of some rather uninspiring personal performances).

Like I say, he's still one of my favourite players... I'm just sayin'.

Terrific result, although I turned over when it got to 4-0, couldn't bear to watch any more... ;-)

Lost control of the TV at 5-0 (bloody 'Life on Mars') - still found myself tentatively enquiring as to the final score later on. Also thought Rooney looked like he'd shed a shedload of weight.