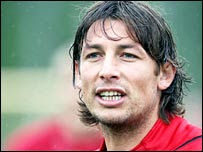 Ha ha ha. Unsurprisingly, Gabriel Heinze has lost his attempt to force Manchester United to sell him to arch-rivals Liverpool. Who guessed? A panel found in favour of his current employers with whom he has two years remaining on a contract?

In the same way as United paid Rio Ferdinand nine months wages whilst he sat in the stands only to be held to ransom for a pay rise the second he returned to action, United fans have quickly turned against Heinze who the club stood by for a year after suffered cruciate ligament damage.

Clearly if the player doesn't want to play for the club, they're well rid. And clearly it's up to the club who they sell him to considering they hold his registration and he is contracted to them. In bygone days, he'd be shunted out to pasture in the reserves until his contract finished, but in the current climate of "player power", he'll no doubt engineer a move somewhere (increasingly looking like Lyon).

Don't you just wish sometimes you could force these idiots to waste years of their career by making them honour their contracts in the reserves? Van Hoojdonk, the de Boers and countless others...
Posted by LB at 6:54 pm

Football - it's a law unto itself.

Contracts don't work like normal contracts but is it because of the money involved?

Not even worth wasting a reserve team place on him... rather, let him, his international career and his profile/status fester in the stands.

he's an idiot - United clearly have to get rid of him as soon as possible, but what the hell was he thinking taking on Ferguson like that? What the hell did he think was going to happen? Did you read that he -- directly against Ferguson's advice -- hired a set of Liverpool solicitors to represent him at the hearing?

How many people have taken on SAF and won? Not many.

Good for utd for holding their ground here.

Hello, am at the Leeds festival tomorrow so here are my predictions for the weekend:

1-0 home wins for the wildcard games.