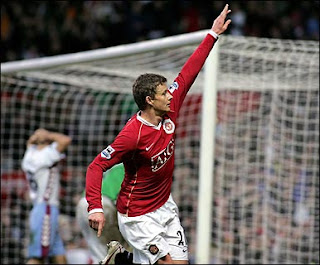 So, after 368 appearances and 127 goals, one of the Premierships most likeable football characters today announced his retirement.

Signed in 1996 (famously when the club were turned down by one Alan Shearer) for £1.5million, Ole Gunnar Solskjaer was a relative unknown outside his native Norway where United scouts spotted his talent after he had scored 32 goals in 41 appearances for Molde.

He began his reciprocal love affair with the United faithful a mere six minutes into his debut when he came off the bench to equalize for United in a 2-2 draw with champions Blackburn Rovers. He scored 18 goals in this first season as United won the Premiership.

From there, his predatory instinct, tireless work and team ethic made him, I would suggest, United's most popular player in the post Cantona era. I think he's also one of those rare United players (certainly of recent years) that opposition fans begrudgingly respect. The lack of front page scandal or back page demands for exorbitant wages, coupled with his unquestioning acceptance that he was rarely a first team regular (although he started over 200 games for the club) endeared him not only to the United faithful but also football fans in general. 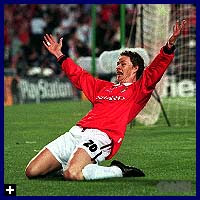 His highlights were many. Clearly, a way to surefire legendary status at any club is to score an injury time winner in the European Cup Final but many forget Solsjkaer's late winner against Liverpool in the 3rd round of the FA Cup in that famous Treble season.

I also really admired his performances in the 2002-3 season where Ferguson stationed the Norwegian on the right hand side of midfield with the lone Ruud van Nistelrooy up front. Some eye-catching displays and 16 goals ensued that season.

My personal favourite Ole memory however is this ten minutes of brilliance as he came off the bench to net four times in ten minutes in an 8-1 demolition of Nottingham Forest. Superb.

And so, when I moved house to number 20 last year, how on earth could I resist painting my front door red with the "20" in pride of place?
Posted by LB at 9:02 pm

Hmmm... I was with you until the 8-1 bit. To paraphrase Dave Bessant in the following Monday's 'Evening Post': 'Why did we keep throwing men forwards? Did we think we were going to win 5-4?'

Yes, I agree with all the 'what a lovely guy, genuine pro' etc stuff in general yadda yadda yadda - but what I can't forget (like probably quite a few Geordies) is his incredibly cynical foul on Robert Lee at Old Trafford in April 1998.

But it also denied us a clear goalscoring opportunity, and if we'd ended up going down because of missing out on the extra two points (and a first Premiership win at Old Trafford, something we still haven't achieved nearly ten years on), then you can guarantee I wouldn't have a nice thing to say about him...

well, of course he'll be remembered for that goal in 1999, but as a non-Utd fan, I've always seen him as a shining example of what a footballer can be -- professional, certainly, but also seemingly a really nice guy. He earned a whole pile of money, but did he ever complain about starting off the bench? did you ever see him in the press? Was he ever likely to be holidaying on a Greek or Spanish island with his football-playing mates and a few dolly-birds to take back to film at the appartment? No.

For that alone, I salute him.

He was also a damn fine player.

So Ole Gunnar Solskaer: good (if not great) player and a nice bloke to boot. How many of them in the Premier League (although good point Ben - an excellent professional too)

... and I bet you didn't need to look up the date of that goal either. Right up there with 29th May 1988 -- the happy day that Wolves took home the Sherpa Van Trophy with goals by Andy Mutch and Robbie Dennison.

I'd sit on a bench for a couple of hours a week for a trouser load of cash too. I'd even be prepared to jog up and down the touchline and do a few stretches.

It's interesting you mention that, Ben, as it was highlighted by the Guardian (spit) as one of the six highlights of his career - something to do with his team ethic. I actually remember Luke Chadwick (!) doing exactly the same thing in a match against Liverpool a few years back - a straight red but denied a clear goalscoring opportunity.

Cynical, yes. But it was Solskjaer's only career red and so we can perhaps allow him one, can't we?

Funny that Ben remembers his foul on Rob Lee, and I clearly remember him elbowing Aaron Hughes in the back of the head at Old Trafford, miraculously finding himself unmarked seconds later, enabling him to score.

Baby faced assassin in more ways than one.

I'd forgotten about that him laying Hughes out with that elbow, Paul - that was pretty nasty, it has to be said.

Mmm, these grapes have a bit of a tang to them, don't they?

Lord B: Highlights?!! Give me a fucking break - laud the guy for his goalscoring feats and his refusal to moan when kept on the bench for long periods of his career, but not for one of the most calculated and cynical fouls I've ever seen.

Ben - I never said it was a highlight - thank our chums at the Guardian for that....

Sorry, yes - that was directed at the Guardian, not you.