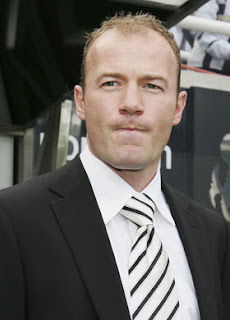 Newcastle United haven't been short of so-called "messiahs" over the years and the latest local hero to attempt to return the club to some sort of (largely fictional) "former glory" is none other than the man after who this blog was named.

It's hard not to be cynical about the appointment. Eight games remain with a difficult run-in and Shearer has been at pains to maintain he has only taken the job until the end of the season. No doubt the best part of a million quid helped the decision, but the fact that with so little of the season remaining he can either a) keep Newcastle in the Premier League to great acclaim or b) spectacularly fail, pocket the dosh and blame the previous management before hotfooting it back to the safety of the Match of the Day settee.

s when apportioning the blame. Considering the level of expectation associated with the club, 2008/9's management appointments reading: Keegan, Kinnear, Hughton, Shearer hardly sets the pulses racing. Shearer has himself little of the coaching qualifications expected for a job at this level.

The best Newcastle can hope for is a surge of optimism and belief that leads to them achieveing the wins they need to stay up. Such optimism was all but absent on Saturday though as Chelsea secured a fairly routine 2-0 win at St James Park. Newcastle are at Stoke next, and a failure to win that fixture would see them edge towards becoming odds-on favourite for the drop.

Having apparently resisted the overtures of his boyhood club before I am not surprised that he has made this shrewdly opportunistic move now. Like I say, he has nothing to lose (other than the pain he will supposedly suffer if the team go down. Yeah, right) and everything to gain. Still, if he succeeds in imparting his dirty tactics and constant haranguing of officials to his team, I suppose they have every chance.
Posted by LB at 8:44 pm

2Still, if he succeeds in imparting his dirty tactics and constant haranguing of officials to his team, I suppose they have every chance."

After all, it's worked for Man Utd for years.

Absolute world-class bitterness in this blog, well done. The fact that Shearer has taken on a job no one else wanted, for money he doesn't need, completely escapes you.

"Dirty tactics" is a lazy generalisation, usually trotted out by bitter fans who saw Shearer hammer goal after goal past their teams over the years. "Constant haranguing" of officials" is simply a fabrication on your part.

As for NUFC's former glory being fictional, if anything this is a testament to the loyalty and passion that NUFC fans show towards their club - no trophies since the 60s and yet the entire city is obsessed with the game. A minor, insignificant northern club and yet sufficiently important for you to write a blog dedicated to their greatest player.

I wouldn't exactly call it "dedicated" to Shearer, to be fair....

I'm not bitter, either. I just really don't like the fella.