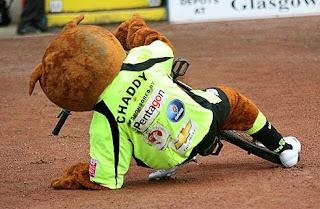 Oldham Athletic's injury crisis worsened on Good Friday when 7 foot mascot Chaddy the Owl (better known as 34 year old Wayne Hurst) fell off a BMX bicycle when attempting an ill-advised wheelie prior to the League One tie with Carlisle United.

Chaddy ruptured ankle ligaments in the, er "accident" but did bravely maintain the mascot's unwritten rule that "you never remove your head in front of the crowd" by refusing gas and air from the attending St John's Ambulance staff.

He said: “I knew as soon as I hit the ground that I was in trouble. I was shouting to the stewards that I’d hurt myself but they were just laughing.” He was given a standing ovation as he was wheeled off the pitch.
Posted by LB at 2:10 pm