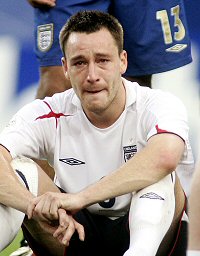 I listened to a bit of John Terry's press conference today on the news.

It made me wonder why they bothered with them.  Seriously, when was the last time that you heard something interesting at a football press conference from a player (or, indeed, from anyone)?

To be fair to Terry, the questions that most people wanted to ask him were related to the racism row that is the subject to a police investigation, so he can hardly be blamed for not wanting to comment on that, and I suppose he was pretty brave to front up at all when he didn't have to..... but even so, what he did say was a long stream of fairly meaningless platitudes.  I'm so proud to play for my country...blah blah... game's changed since I was a kid... blah blah... jumpers for goalposts... the boys are playing so well... blah blah... no one is undroppable...

What's the point?  If the players aren't going to say anything at all insightful or interesting, then why bother?

When actors are interviewed, they're almost always plugging something, and there's a mandatory bit in every interview where they tell us about how this is such a great movie and how happy they were to work with their co-stars and the director.  Fine.  That's part of the package and is why they agree to be interviewed anyway.  Even so, am I wrong in thinking that actors still manage to be more interesting than footballers in a similar situation?  Now that I think of it, did John Terry even talk much about the Sweden game that he is promoting?

Musicians are even better value, many not being afraid to fire their mouths off as they promote their latest album... although, to be fair, manufactured boy bands apart, they're expected to misbehave and stirring up a controversy is hardly likely to harm their record sales.

So what is it about footballers?  Why are they so anodyne?

Well, the press itself is obviously in large part responsible: the moment a footballer steps out of line, then the media is more than happy to climb onto their moral high-horses and lambast them with the full-force of their righteousness.  These players earn hundreds of thousands of pounds each week, and apparently that fact makes them fair game.  John Terry himself knows this better than almost any other current footballer, so is it any surprise that he's cautious never to step out of line when there is a microphone or a journalist anywhere near his face.

That's not the only reason though.  I think there's a much simpler explanation: footballers are simply not clever enough or interesting enough to keep an insatiable media satisfied.  That's not necessarily a reflection of the stupidity of the average footballer.... although you do have to ask why John Terry keeps on getting caught out by the media, time after time, when he knows they're watching him and will crucify him at every possible opportunity, and I do wonder about whether he has the wit to answer a simple question in an interesting way.... It's not even particularly an observation about how one-dimensional most footballer's lives seem to be, although they do some awfully dull people: they play football, they display a spectacular lack of judgement and taste in how they spend their riches and they don't read books.

No, I think it might just be a reflection of how voracious our football media is.  There is no one, no matter how smart or interesting, who could be smart enough or interesting enough to be able to feed these wolves for long if they came under their spotlight.  John Terry said absolutely nothing interesting in his press conference today, and it was still dissected in minute detail by the press: it will be the lead story on the back pages tomorrow, and Radio 5 Live has just spent the last hour debating his non-comments in almost forensic detail.

Can you imagine how they'd react if he said something even mildly interesting?

Poor lamb.  It's almost enough to make me feel a bit sorry for him.

...and then I remembered what a charmless, unpleasant individual he is and how much he gets paid for how little, and realised that a mildly uncomfortable half hour spouting practiced platitudes at the press really is money for old rope.  He doesn't get paid extra for selling papers, does he?  Why should he bother being interesting?

As captain of our national football team, he represents this country, you know....although looking around, maybe that's about right.
Posted by swisslet at 7:42 pm

You are right hardly you can get something from a players press conference. They only say obvious things.