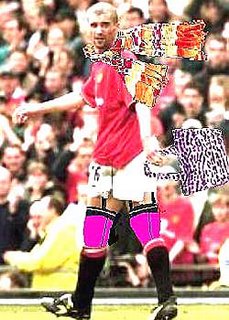 It's been a little while since I raised the issue of my own personal club, and with them hitting the news again this week, I thought it was perhaps time for a review of where we are so far this season.

Commentators have this slightly bizarre opinion of United that we have recently been genius and it's all just a matter of time before we click and give someone a walloping. This is utter, utter fallacy. United haven't actually been any good, other than a very odd game or two, since 2000. The second Juan Sebastian Veron was unveiled in the centre of our midfield, we have never recovered. I'm not blaming Veron specifically, but this whole idea that we have remained at the top of the pile since that time are frankly ludicrous.

If you watch United on a regular basis, week in, week out, you will realise one truth. We are not very good anymore. We can't score goals. We can't defend. We are about as exciting as watching Midsomer Murders in slow motion.

And this season we are plumbing new depths of hopelessness. The 4-1 defeat, entirely deserved against Middlesbrough on Saturday was the final straw for long-serving captain and Ferguson mouthpiece Roy Keane. In an interview pulled by GMTV earlier this week, Keane is believed to have named and shamed several members of the current squad he felt were either playing by reputation, or not understanding the need to play with passion for the side.

Ask a United fan - Roy Keane is quite, quite correct.

I have no panacea to our problems. I don't think it is the manager, or the board, or the takeoever. I think teams have certainly caught up (and overtaken) us, but the biggest problem we face is that our current first team squad is simply not good enough. And, the so-called "big name" players on that teamsheet are largely underperforming.

The players that can escape general hostility at present are few and far between. Rooney and Ruud are working hard with zero service. Ronaldo will be genius when he learns that falling on his arse won't win a free kick every time.

The one player I will single out for abuse is £120,000 a week clown Rio Ferdinand. Was there ever a player who owes a club a decent set of performances over months and years having (i) dropped them in the doo-doo by forgetting to take a piss and sitting watching the season go down the toilet whilst pocketing £80,000 a week and (ii) stringing the same team along for months whilst deciding whether he'd settle for a mere 50% pay rise.

(Paul Scholes contract negotiations during this same period took one hour. He walked into the office, had his accountant check the deal, signed it and left.)

Rio needs to be very careful. If we had more than three fit defenders, he wouldn't be playing. England found a couple of better ones and had no hesitation in playing them instead. The main chant to be heard at FC United of Manchester games goes:

Which says it all.

United are a team in irreversible decline. The squad isnt strong enough, teams are no longer afraid of them and the manager is, now we are in the Glazer era, on very shaky ground. Pity the poor bloke who ends up taking over from Ferguson as he is going to inherit an aging, increasingly complacent side who haven't shown any sign of winning a significant trophy (discounting beting Millwall in an FA Cup Final) since 2003.

I find it depressing yet at the same time mildy amusing. Oh, and we're now 1-0 down to Lille in the Champions League as well. On the basis we can't score more than about a goal a game, that's a draw at best, then.

Our next game? Chelsea this weekend. Want my advice? Stick your house on the Champions. And pick up two houses at 6pm on Sunday.
Posted by LB at 8:38 pm

I was thinking only this morning of how I should do a post about how crap Manchester utd are.

Guess you beat me to it!

Apologies to the esteemed Lordy B, but it's really proper piss funny for everybody else!
And like you say, it doesn't look like it's gonna get any better.

Rio is a complete waste of space, Keane's had it, Smith's a bloody striker, Van Horseface seems to have lost it completely, Fletcher wouldn't get into Bolton's midfield & Fergie must be wondering if selling Phil Neville was a good idea after all.
As for that preening little twat Ronaldo, if falling over or dancing little jigs on the wing without actually delivering the ball is what your after, than he's your man.

I feel sorry for Rooney (I don't really) for joining such a great club at such a bad time!

Chelsea will whoop them on Sunday, just like the mighty Middlesboro & the mighty Lille.

It is sad to some extent to see the decline of a great dynasty, but to be honest, let's have some perspective here. Almost every other football club in England, and probably most of the clubs in the world would be happy to swap their position for this kind of "decline". Be sad and angry about your decline, by all means, but just remember to be thankful for what you still have.

Rooney, for starters. Even Chelsea cast envious glances at him.

I honestly think that there is a "new world order" appearing in football where our current paradigms (there's a big word on a football blog eh!) are being challenged and re-framed.

The big names of our youth - Man U, Everton, Liverpool, Newcastle United, Arsenal - they are all on the decline (Yes, one could even drag Forest kicking and screaming into those teams companies). Only Chelski bucks the trend - and they were never THAT great a club in OUR youth.

And take a look at the table today...Spurs? City? Bolton? Charlton? WIGAN? All on the rise, all on the ascent to greatness. I mean, could we have ever imagined 15 years ago WIGAN second in the top league? Bolton in Europe? No way.

The new world order of football is here, with teams underperforming and overperforming against previous expectations.

What and where has this new world order come from? Where has it appeared from?

I don't know for sure, but it certainly makes for an interesting time each Saturday (and Sunday and Monday).

I guess you could expect a gloat from over the Pennines, and of course I cannot disappoint! For all the laughs at Leeds' decline, there'll be many more people laughing at The Glazerskins decline.

But rather than blame certain players, I think the blame lies squarely on the shoulders of Fergie - was he retiring, was he not, no he wasn't. He thought he could run the club without an assistant, then decided he couldn't. He then lost his transfer judgement: Veron, Kleberson, Djemba, Miller, Smith, Ferdinand, Saha, Bellion, Bartez, Howard, and now perhaps Park, a total of approx £120m before wages. He was irritated enough by Beckham to send him packing and the downhill fall has continued a pace, as Scholes & Giggs form badly declined & Keane got old. No new youngsters came through (apart from O'Shea and Brown - both injury prone and inconsistent). Fergie's flap continued with a change of tactics, a more European approach, that has merely resulted in fewer goals, victories, points and titles. Success also bred complacency, and a lack of the hard working ethic so present in the 90's. The spirit of the club is infected with a virus, perhaps made worse by Glazer's arrival. But even if he hadn't arrived, the continuing decline would have continued. It is difficult to see how things can change around without Fergie going along with the Spanish geezer and several players. They need to get back to the youth, get rid of the overpaid prima-donnas, and get back to hard work. All successful clubs that dominate for a long time eventually decline - it happened to Revie's Leeds and to Liverpool. The decline of the Glazerskins had been a slow almost imperceptible decline over the last 4 years. The speed of the decline is perhaps increasing. I heard the stats on their CL games Ihadn'r realised they were so bad: no away win in Europe for nearly two years, no goals in 6 of last 7 Euro games.

Both Liveprool & Man Utd are now playing some relatively poor football and it is hard to see either team getting lucky in Europe and are now on a level playing field with average standard of the Premier League.

The ultimate indication of decline may come with a Wigan victory on 14 December at the Old Superdome.

The fans must also be nervous about the Chelsea and Charlton games, perhaps even West Ham and West Brom that are coming up.

But then Keane's TV intevention may well bring the much needed kick up the backside the club needs. It'll be an interesting couple of months ahead, and Sunday's game is monumental.

At least it makes the Premiership more interesting - the 3 other Champions League places appear to be wide open.

I like Alex's idea of the new world order of football. I also can't get away from the brutal ugly unfashionable idea of 'work ethic' being important in terms of understanding the rise of these clubs. You look at teams such as Bolton, Man City, Wigan, and you'll see that they are severely limited in terms of what they could offer players, as compared with the Premiership big guns. They've also got squads that are peppered with players who have been on the brink of saying goodbye to top-flight football. Thus, they're less likely to be set for intra-squad niggles over who's earning what, and who isn't giving value-for-money and so on. As individuals they understand that they have something to prove, and collectively, a lot to gain.

I admired Fergie for letting Beckham go and bringing in Rooney, but some of the nervy transfer/contract dealings suggest he knows his task is an increasingly desperate one (in a Man U context).

January could be an interesting, if not desperate, month.

Ahem!
Its Friday and the prediction leagues not been updated nor has this weeks fixtures put out.
Not that I'm complaining mind.

Oh and my twopennyworth on Man U?

I'm actually looking forward to playing them this season, rather than dreading it, although looking at our home form so far, they'll still thrash us.