Even though I am a season-ticket holder at the Buccaneers, with me having my beautiful daughter this weekend I wasn't able to get to the Glazerdome to see the Chelsea game.

So, instead, I thought I'd pay my £7 and make another away trip in the North West Counties League 2nd Division to see the "vigilante" United team in action for the second time this season. Going into the game, FC United were top of the league with a record of played 11, won 9, drawn 1 lost 1, for 41 against 11.

An average of about four and a half goals a game, a family atmosphere at the ground, a cuppa that doesn't cost you a fortune, seats, a good view, the ability to park within a couple of miles of the stadium, players who give a sh*t.....

Today we were up against Eccleshall FC (average crowd 70) who had moved the game (as all teams in this league have so far done to cater for the much larger crowds) and so 2,011 piled into nearby Stafford Rangers Marston Road ground for todays fixture. Of course, I took the nipper. 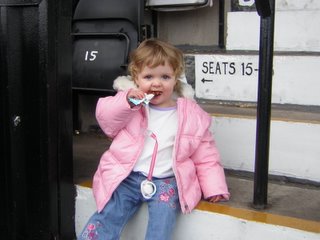 You can't argue with a Peter Rabbit fruit bar before kick-off, can you? And we were royally entertained for half an hour with Rod Stewart's Greatest Hits. You don't get that in the Premiership. 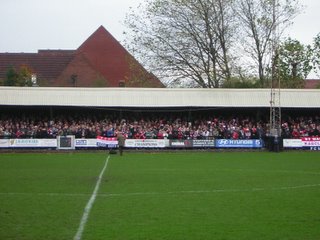 The FC away support. We were sitting in the posh seats. (Well, I say posh. They were seats.) An entertaining first half finished goal-less, the best chance falling to Eccleshall after a mix-up between FC's keeper and centre half.

And a great chant that went:

"Rio - the man with no shame....." He gets the brunt of all the chanting at FC United games. And rightly so, the useless greedy corn-rowed b*stard. 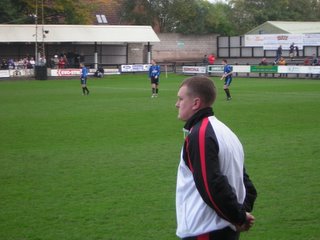 This is the North West Counties League Division 2 current Manager of the Month - "super"Karl Marginson. Vegetable delivery man by weekday, manager of FC United by weekend. 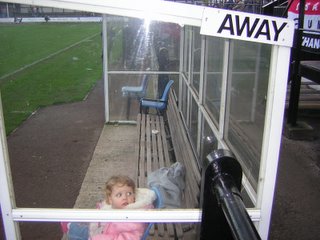 Although at half time, FC appointed a new, younger manager..... 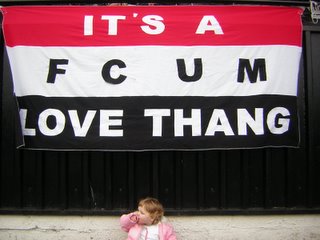 It's a love thang, apparently.

An entertaining game ended up goalless. Bloody typical after an average of four goals a game all season, and we had deliberately gone in search of goals after the real United's recent spectacular failure to be able to hit a cows arse with a banjo. Anyway, another great day out - if anyone hasn't been to this type of football for a while I would genuinely recommend it. Nice people, some competitive football and grounds, facilities, terracing and refreshments like football used to be.

"the real United's"??? Surely a slip of more than just Freudian standards.

Surely the FCUM are the real United, and those "others" just the pretenders...

still the worst club name in the history of football though.

Good job it wasn't an American who formed FC United. After all, the acronym of Soccer Club United of Manchester just wouldn't make the right kind of statement. Then again, you could say that it reflected the club's pre-2005 roots.

Ooh it warms my cockles to see Judas, erm sorry, Rio Ferdinand getting it from all angles!

Oh, and ps/ impossibly cute pictures of the kid. Quite unfootball.

Departs to go get a pint and turn to talk of booze and birds... masculinity untainted and all that.