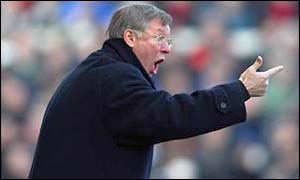 So, Manchester United crash out of Europe before the knockout stages for the first time in a decade. Their 2-1 defeat at the Estadio de Luz against a weak and injury hit Benfica side meant they finished bottom of Group D, and so did not even have the consolation of UEFA Cup football.

There's no complaints from this corner: six games, one win, three goals scored is simply not good enough in 450 minutes of football. Especially in a group against a Benfica side struggling in their own league, a poor Lille side and a second rate Spanish team in Villareal.

At the risk of repeating myself, this is not a complete surprise. Whilst I fully expected United to win tonight, the decline (especially in Europe) has been going on for six years. No away win in Europe since November 2003 and a dearth of goals have seen United fail to get anywhere near winning the trophy since their success in Barcelona in 1999.

They simply aren't good enough a side any more, or, more interestingly, tactically unable to compete with European opposition. What this means for the manager is, I suppose, the key issue. Not only is his transfer kitty reduced by anything up to £15million but the reality is that the Glazers are increasingly unlikely to want the manager to remain at the helm after the end of this season. Probably the only thing that can save Fergie now is a Premiership title, but with the imperious form of Chelsea this seems unlikely.

Plus, changing the manager could go either way. A new boss could bring in players and galvanise the team into a better unit. Or, the whole thing could fall to pieces completely as it turned out it was Ferguson holding the whole shebang together. Who knows?

I'm not one for overreaction so you won't see me yelling for the manager to be sacked. I just think that it is further proof, were any needed, that United are a team in seemingly irreversible decline.

Sorry, but I can't help grinning this morning at United's plight!

As a Liverpool fan, I have suffered over 10 years of major grief from United fans due to our crappy performances and lack of trophies...until last year.

I will enjoy this dark era in United's history for a while longer.

However, United being United will be back. They are still in an excellent position in the league and still the most likely team to catch up to Chelsea.

A few new players brought in during the next transfer period in January is a must, that's if there's any spare cash in the Glazer pot.

you've hit the nail on the head: Utd have shown nothing in Europe this season that would suggest they deserve any better than they got. What interests me is the clamour in the media about their failure to qualify. In part this is down to their phenomenal success over the last decade: we expect them to get to the knockout stages. It also shows that people don't watch football with their eyes open... as Lord B says, this is an average side that has been playing poorly. It's not the mighty Man Utd of old. Actually you could almost say the same thing about Arsenal as well - they are clearly not the side that they were.

The draw should be interesting though, with sides like Chelsea and Real Madrid only finishing 2nd in their respective groups. I shouldn't think anyone much fancies drawing Lyon either.

"I just think that it is further proof, were any needed, that United are a team in seemingly irreversible decline." - Yay! Life is just so peachy at the mo!

As a Benfica fan and as a footbal lover allow me to say that:

1. Benfica, champion in title, is not exactly struggling in its own league. The problema is that Portuguese league, contrarily to the Premiership, is a very competitive one and Benfica has been experiencing a very harsh first round of games...but count us in for the second round of the championship (When we get the chance of playing most of our direct opponents at Stadium of Light);

2. Benfica made, in my honest opinion, a wonderful round in the Champions League and was unfortunate not to have won the away games in Old Trafford and in El Madrigal. Thus in my perspective the winning over Manchester came naturally;

3. Even though Manchester United lost their chance of participating in European Leagues (and of winning the Premiership as well, obviously) I still say that MU has a pretty good group of athletes, which if provided with some serenity and one or two good signings can achieve a much better sports performance.