If you are anything like me, your matchday will have a set routine, from which deviation is uncomfortable and undesirable. Bearing in mind I have today largely wasted the chance of a nice relaxing Sunday on a five hour round trip to the Theatre of Dreams (oh, how the opposition fans laugh) I thought I may as well share with you my Manchester United matchday routine.

The first stop (which I sadly don't have a picture for) is ordinarily the McDonalds, halfway between the M1 and M6 on the A50 at Uttoxeter. Ideally placed on a roundabout, sometimes for breakfast, sometimes for lunch (dependent on kick off time) and an occasional petrol refuelling stop at the adjacent Esso garage.

The next stop is at Salford Quays, where a scally fella takes the princely sum of £5 to park us round the back of Fit City Ordsall sports centre for the duration of the match, and we then walk the 15 minutes or so to the ground.

Next stop is for a coffee round the back of the North Stand. (£2.50 for a f*cking latte. That's Rupert Murdoch, that is.) 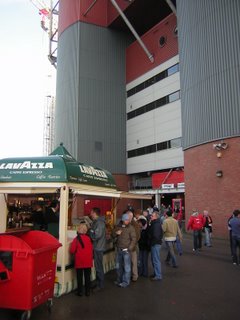 Then, about half an hour before kick off, I present my lovely League Match Ticket Book here, at turnstile W16. 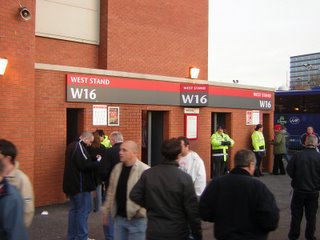 It's then the wonderful experience of 167 steps to my seat, somewhere on the flightpath into Manchester Airport. On the way I stop at the concourse to put £5 worth of best on the game (all shattered after 7 minutes by James McFadden in this instance) and head up to the seat - W104, row 33 seat 85. 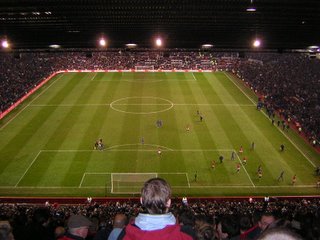 That's my view of every home United game. (Not the back of someone's head, on the whole, they'd just stood up). Top tier of the Stretford End in the singing section (today's chant of the afternoon: "Feed the Scousers, Let The Know It's Christmas Time..."). 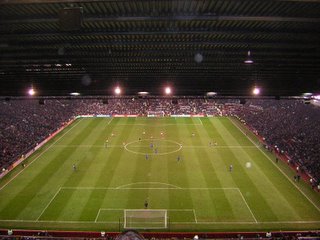 It's not the ideal seats, clearly, and, as attendances and demand for tickets at Old Trafford wanes (which it has - you can still buy tickets for Wednesday's home league game to Wigan which would have been unheard of a few years back) the club are offering the chance for season ticket holders to move seats at the end of this season. As my mum sits in the North Stand (on the left as you look at this picture) I think we are going to agree on a location and move in the summer. I'll lose some of the Stretford End atmosphere, but get a better view of the other half of the pitch. And I get to sit with someone I know, rather than the mad skinheaded nutter who currently sits in front of me leading the singing and getting regularly ejected for not sitting down. 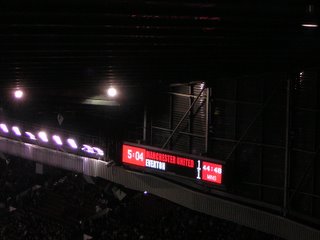 And there's the rather depressing scoreline. And a poxy rubbish scoreboard to boot.

What normally happens then is that we complain about United's performance for about half an hour, sit in traffic for half an hour, and then come home (via a stop at the Shell garage at Keele services as they have one of those nice Coffee Nation machines - especially good at 1am after a midweek game).

So there you have it - that's my matchday sorted. Anyone else got bizarre matchday rituals? (or want to laugh at United's ineptitude?)

I just came here for a giggle really, you should see our scoreboard, the poxy thing keeps going wrong when they forget to put 50p in the meter

Not wearing a replica kit and going to the same boozer is my habit.

I worked in Salford Quays for around 5 years - yep, dodgy and full of scallies. Cars (including mine) used to get scratched and damaged and no, I never had any Liverpool stickers on it to single it out. I suppose I was fortunate that no one ever broke into it, or carjacked me at traffic lights.

You have a scoreboard?

We don't - which is presumably why, this season, we've adopted an approach in which one would prove largely redundant.

Used to have to climb 140 steps to level 7 at St James' Park, but due to our ineptitude last season I now only have to contend with about 40. I bade my farewell to the Bovril drinker who used to be next to me, and actually got to sit next to my wife during the game.

Unfortunately we've inherited some less than pleasant charcters behind us. Now I'm not averse to swearing at football matches, but even they make me whince at times, and that's before their latent racism sneaks out. Charming fellows.

Still, my view of the pitch is much better.