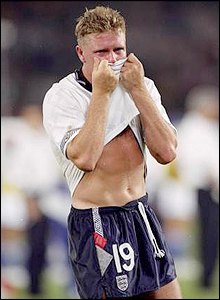 Well, it's been another eventful twenty four hours in the life of this man.

Yesterday, he was sacked from his post as manager of non-league Kettering Town after just five weeks in the job. Owner Imran Ladak alleges that Gazza was "under the influence of alcohol" whilst in control of team affairs on 37 occasions, an allegation that Gascoigne denies. Gazza claims that he was never left alone to run team affairs due to interference from the chairman.

Later yesterday evening, the police confirmed they had arrested a 38 year old man in Liverpool after a member of the press alleged Gascoigne assaulted him after he attended a fund-raising event for a drug and alcohol rehabilitation centre.

The Kettering chairman has urged Gazza to seek medical assistance for his ongoing alcohol problems.

Whichever side of this argument to believe, it is hard to see any future for Gascoigne in the game. Failed spells in China and as a coach at Boston United, coupled with this latest debacle have probably tainted his reputation in England for good. It is hard to see a chairman prepared to take a gamble on the former England international even if the allegations this time are unfounded.

Although I had half hoped for him to make a success of the job, I was never entirely sure he was cut out to be a manager. He is/was clearly an exceptional talent and there is certainly room in the game for players to learn from his experience and technique. But man management? Never quite saw it.

It's a shame, really. In the week football lost one of its greatest natural talents to alcoholism, despite claims by Gazza to the contrary it seems almost inevitable that we are going to lose another one the same way.

I feel really sorry for Gazza. Although he undoubtedly only has himself to blame for some of his problems, it seems that, like George Best before him, the press in this country are only interested in seeing him destroy himself. He just can't win, and presumably we won't be happy until he's dead and we can all talk about what a great talent he was.

It's so sad - he seems like a lovely guy, but he all too clearly isn't equipped to cope with life off the football pitch. It was bad enough when he was still playing, but now he is retired it has the unmistakeable whiff of a tragedy waiting to happen. He's a simple lad who has been chewed up and spat out by the machine. Fingers crossed for Wayne Rooney, eh?

I echo both LB and ST. I just saw a clip from yesterday's interview with Sky - my heart sinks every time I hear Gazza's slurred speech. There's undoubtedly a load of pressure that comes from simply 'being Gazza' - after all, he's a peculiarly mix of tragic icon, sporting legend (almost) and easy-going entertaining bloke, someone who puts smiles on peoples' faces. I guess if Gazza could disconnect from that public image of himself then that would be a start at losing some of the pressure.

Thinking about this, it's almost enough to make me want to write a letter!

Despite the supportive noises that have emanated today, like ST, I expect there will remain a whiff of tragedy. I would love to be wrong about this.

But this time I think I can safely say that it would be a waste...

Its a shame (as Swiss rightly) points out that the press only seems to want to destroy him, and Sky Sports News holds a lot of responsibility in that direction last night. There was not a lot of honour in their court last night showing that video of him...