And so, after a 2.30am start to get to Stansted, Sarah and I arrived in Eindhoven at breakfast time last Friday. After dropping the bags at the hotel, and some coffees, toasted sandwiches and a fiercely competitive game of Star Wars Episodes 1-3 Top Trumps (won by yours truly once I managed to prise Yoda out of my opponents hand by using Jar Jar Binks' height as the tactic), we headed to the nearby town of Nijmegen for the first of our three weekend matches.

I should point out here that Dutch railways are clean, reliable, efficient and reasonable. How is it that every other country's rail systems are fantastic and ours so bloody useless? Although (and this became a regular occurrence), once my head hit a train headrest, I nodded off.... 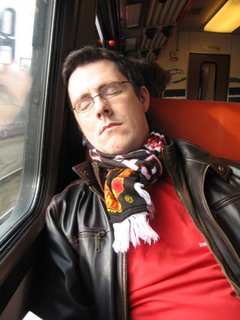 Nijmegen itself was pretty horrid. Once we had got our bearings, we headed into the town centre past a selection of ugly 1960s buildings. I suspect that much of this old town was levelled in the Second World War and most of it looks like it was rebuilt our of concrete and pebble dash sometime around 1950.

The town centre was pretty horrible too - faceless ugly shopping streets and an H&M on every corner. So, after exploring the town (it took about fifteen minutes), we escaped the cold and went for a beer or two.

We then caught the bus out towards the stadium and then had to walk for about fifteen minutes from the bus stop over towards the De Goddert stadium. It was *freezing*. There was about four inches of snow and I was absolutely chilled to the bone. We arrived at the stadium and found the ticket office and spoke with a very nice chap called Pim who I had been e-mailing beforehand to source our tickets for us. 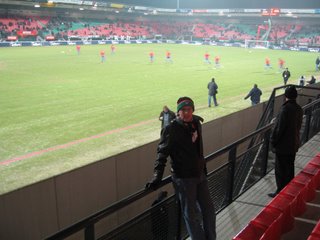 The stadium holds 12,500 and by the time the 8.30pm kick off time arrived, it was probably about two thirds full. Once interesting point that was immediately apparent (and was borne out over the course of the weekend) is that the away support in Holland is absolutely useless. Bearing in mind it's a fairly small country, and AZ are third in the league, they must have had no more than about 100 fans. These poor blighters were behind one of the goals in what can only be described as a cage - penned in on both sides and fenced in from the pitch.

The first half was a pretty drab affair. The hard pitch didn't help, and chances were few and far between. An amusing interlude occurred when I saw about the first ever goalkeeper "airshot from a backpass" that I have ever seen. I have seen plenty of keepers shank clearances into the back of the stand from a backpass but hardly ever them swinging and missing it completely so it goes out for a corner. So, thanks to Raymon van Emmerik for that. 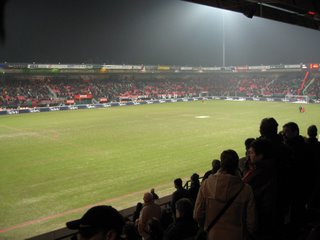 Another strange fact about this game is that NEC have an English centre half called David Jones. The odd fact about this is that David Jones has never played football in the UK. He has made over 325 appearances in the Dutch league since 1992 for Vitesse Arnhem, Dordrecht 90, NEC Nijmegen and FC Twente but no-one outside Holland has probably ever heard of him.

The second half opened a little more brightly and two goals in three early second half minutes effectively sealed the result. A quick AZ counter attack saw Haris Medunjanin score with a smart turn and left foot shot from the edge of the penalty area. Almost straight from the restart, Medunjanin escaped down the left wing and although his cross eluded Steyn Huysegems, Danny Koevermans was there to finish smartly from close range.

Although NEC played some tidy football, other than a volley over the bar by Edgar Barreto when he should have done better they didn't pose AZ much of a threat, and a series of substitutions broke up the already dull game and AZ ran out comfortable 2-0 winners.

So, NEC woolly hat perched on my freezing head, we walked for ages, waited ages for a bus and escaped Nijmegen. Next stop, Eindhoven...