You may know that the capacity at Old Trafford is in the process of being increased by the addition of two upper corner quadrants at the stadium. What you may not know is the difficulty the once-great club is having in filling thse seats. 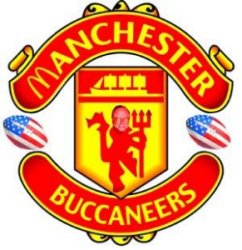 For example, I, along with thousands of other United fans are "league match ticket book" holders. This guarantees me admission to every Premiership match in a given season, plus home Cup matches should I want to (I pay for these on a match by match basis). And, that's it. Supporters with "season tickets" have additional benefits such as the opportunity for away tickets etc.

This close season, all existing League Match Ticket Book holders are being "upgraded" to Season Ticket status. Applications are also being taken for Season Tickets for the additional part of the ground.

For the Wigan game earlier in the season, you could have bought a match ticket on the day of the game. This is the first time I remember this happening for a Premiership game in the last six or seven years.

This is my favourite bit.

The club are trying to flog these grand executive box packages (see here). £205,625 per year for a box that holds 16 people including a host of benefits including Executive Box access, the opportunity of seeing the team train, priority booking etc.

However, if you were unsure about paying this amount, you do get half price access to the Museum.

HALF PRICE ACCESS TO THE MUSEUM? Last time I went it cost about a fiver. For a couple of hundred large ones a year, you'd have thought they just *might* have lobbed in a trip round the museum, eh?
Posted by LB at 12:08 pm

Now that is the funniest football story I've read all week. 1/5 of a million and half price entry?

I've seen the website for the quadrants and they do look quite nice.