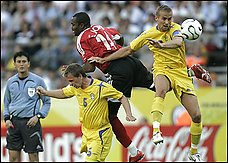 So, day two of the World Cup provided some terrific television entertainment (more of that later...)

And so, it was a great day for England, if not a breathtaking performance as they scraped a 1-0 win over Paraguay. Of course, the weather was to blame as it was a little bit hot for our lads. It must have been hot every day England have played a competitive match since 2002 on that basis, as our inability to turn up for the second half is now becoming stuff of legend.

In the other match in Group B, Trinidad and Tobago did England a huge favour by holding Sweden to a 0-0 draw (above). Sweden pretty much dominated the game, but Trinidad were unlucky when Cornell Glen hit the crossbar in the second half with a screamer from a seemingly impossible angle. ITV decided to wheel out bloody Gareth Southgate again for this one, which didn't do much for my enjoyment of a scoreless draw.

And then in the evening kick-off, an entertaining match between Argentina and the Ivory Coast ended 2-1 to the South Americans. The "plucky" African "underdogs" clearly showed their "lack of experience" as they "bravely" fought back from 2-0 down to nearly pull the match back level in the closing stages. Some kudos however to Mr & Mrs Toure who decided to call their kids Kolo and Yaya...

And then came the TV football event of the day. 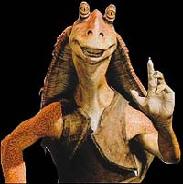 I have genuinely no idea where to start with this. For those of you unfortunate enough to miss it, it was an hour of hilarious prankster and famous ugly Gungan Rio "Jar Jar" Ferdinand setting up and carrying out some side-splitting candid camera type stunts on his unsuspecting England teammates. Victims of this loveable rogue included Gary Neville (the carbon monoxide levels on his car are too high! How we laughed!!!!), Shaun Wright-Phillips (but only after original target John Terry got wind of the stunt by reading all the details on a text message to his fiance), Ashley Cole, Wayne Rooney, Peter Crouch and David Beckham.

The stunts themselves were absolute cobblers. That in itself would have made the thing cringeworthy, but that was nothing. The fact that none of the players involved batted a f*cking eyelid to the hysterical misfortune that had befallen them, whilst Rio directed proceedings with a walkie-talkie from behind the scenes, clapping his hands like a seal and being The Only Person In The Country who found this stuff amusing made this one of the worst hours of television I have ever, ever seen.

Indeed, the programme backfired in the sense that all it did was to portray the players involved as generous, upstanding, sensible and civilised people. Take Gary Neville preferring to take points on his licence than indulge a bent copper by giving him a photo instead. Take Wayne Rooney seriously considering giving a dogs home £50,000 as a donation to save it from closing. Take Shaun Wright-Phillips protesting in defense of a waiter in a restaurant who is about to be fired. Take David Beckham who is too polite to scream and shout at his driver, preferring to ask him repeatedly in that polite British way to turn the car around.

So, whilst other ex-footballers take their coaching badges to become managers and coaches, degrees to become physiotherapists or even qualify as referees, Rio has his post-football career lined up as the new Jeremy Beadle. Or not, if last night was anything to go by....
Posted by LB at 2:44 pm

quote of the day from my mate Paul "...he's such a cock. He really is. I actually prefer Jeremy Beadle...."

I've yet to see Rio's wind ups, I'll watch it after the Portugal game. With a glass next to my ear to catch my brain as it drips out.

it was utter, utter rubbish. I watched agog as a man I thought I could think no less of than I already do proved me wrong.

I totally agree with you about the way some of the other players reacted - especially Gary Neville.

There's surely mileage to be made out of something like this if someone set footballers up in a situation where their own greed and stupidity would be shown up (and the closest Rio got to this was the property deal with Peter Crouch, but the joke there seemed to revolve around a midget rather than the grasping footballers). All Rio seems to have done is manage to get some form of in-joke put out on national television....

I noticed it was done by his own production company, featured his record label and managed to squeeze in his own business partner etc. Imagine what kind of a player he could be if he focused on his football, eh?

...and as the Observer pointed out last week.... why was everyone too polite to mention the fact that the Gungan clown had the temerity to laugh at other people when he is the one who "forgot" to piss in a bottle and was banned for the best part of a year.

I thought it was quite funny....

Although I did get so annoyed with Rio, what a nobend! What was with all the hand waving thing?

At first, I was annoyed that I'd missed the programme.

Now I'm not - thanks for putting my mind at rest!

Uncanny likeness to Rio on that photo
http://fcumleigh.blogspot.com/