It wouldn't be a cliche-ridden football website without some sort of retrospective on the months past, would it?

Well. Where shall we start? Perchance a mixture of the sublime and the ridiculous?

Team of the Year

OK, so not strictly permitted, but hey. They're my rules.

Pedro Mendes. Oh come on, you must remember this. 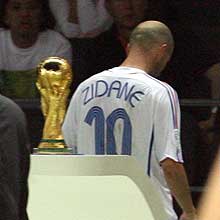 Goal of the Year

The Coldest I Have Ever Been At A Football Match Ever

3rd March 2006. A Friday evening at the de Goffert Stadium, Nijmegen. I genuinely thought I might die of frostbite in the company of NEC and AZ Alkmaar. Or be buried alive in the snow surrounding the ground on the way out.

(photographic evidence of this here)

oh come on. It could hardly have been anyone else, could it?

This is Gisbert Baltes who bought me and my good friend Sarah some kolsch during the Spain v France match at this summers' World Cup. A very, very nice man.

Oh My Word! You Have So Much Larger An Opinion Of Yourself And Your Varying Talents (Such As They Are) Than Anyone Else

Not content with his "hilarious" TV wind-up show (read all about it here), he proceeded to release his autobiography with the tag line "The Most Talked about footballer Of His Generation".

What a load of old b*llocks.

"This is just amazing. F***ing hell, I just can't believe it. It is a brilliant experience and a great feeling to have kept us in the Cup."

A young Micah Richards shocks Garth Crooks into "pretending to be his Dad mode" after his last minute equaliser kept Manchester City in the FA Cup.

Hows about this one?

Player of the Year

OK, so he did a reasonable job in Juventus' defence (for all the good that did), had three or four useful games at the World Cup before failing to plug an increasingly shambolic Real Madrid defence. So, Fabio Cannavaro, close but no cigar.

Similarly, I can't possibly go for Didier Drogba. He may (finally) be showing what he is capable of, but until he quits the histrionics and the diving, he'll never be anyone's idea of Player of the Year.

Who else? Candidates from Barcelona's Champions League triumph have been let down by their form since or their World Cup showing (Ronaldinho, Xavi, Messi), Henry was sublime until Big Games came along (and then got the hump) and Cristiano Ronaldo has proved that Ferguson's your manager of choice post World Cup based vitriol but still a bit tetchy and selfish for my liking.

So, in a vaguely partisan way but also in an overdue "lifetime achievement" type way, I think it's time to salute one of our own. A little fella who has been, I would argue, England's consistently best player over the past ten years. Unassuming, tough, talented, skilful, undemonstrative, magical and with great vision. A guy who (with the exception of his sometimes mistimed tackling) is a great role model for young footballers. A man who Zinedine Zidane claimed was the best English footballer of his generation. Indeed a man who, had he been given Zidane's role in his international line-up, may have been able to have a similar impact.

Yep, my Player of the Year is Paul Scholes. 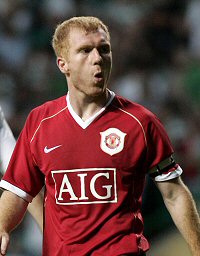 Any other highlights of 2006 that deserve a mention?...

Paul Scholes? WTF? Yeah, sure, he's had a decent season so far and has had a good career for Utd.... but player of the year 2006? fuck off! with this you take your alliegances too far. You discard Fabio Cannavaro (captain of a world cup winning team, world and european footballer of the year and one of the great defenders of his generation) as a candidate for Paul bloody Scholes?

Nice try, but no cigar. From the whole world of football, you pick Paul Scholes? That's so parochial it's absurd.

You might not like Didier Drogba, but I will be voting for him over this tough, talented little lad this season. He's not my player of the year though (he's not even my utd player of the year - step forward Christiano Ronaldo). I might have to get back to you on who gets my vote.

I don't reckon di canio's training ground move is as good as that backheeled volley some Italian geezer scored in a serie A game this year either.

who claimed it wasn't parochial?

I just think he deserves some credit which he clearly isn't going to claim for himself (unlike lots of others).

I dont think Kanu is having a better season, by the way. And as for Zidane - he was fading long before the World Cup came along and had what - a good game and a half in Germany? Two games?

And, to be fair Swiss, "..that backheeled volley some Italian geezer scored in a serie A game this year" was my Goal of The Year....

well, it's a fair cop on the goal of the season... but I think you're being harsh on Zidane. I think inspiring the French team to the world cup final from the point of elimination was no mean feat. When he chipped that penalty in the final, I was saluting him as a genius beyond question. Christ, even his exit from football will be pretty hard to top.

He's not my player of the season though. Of that Italian team in the world cup, I would nominate Buffon, Cannavaro, Zambrotta and Gattusso (all of whom I would pick out ahead of Paul Scholes). Did anyone else much really stand out in what was a very disappointing world cup?

In club football it's harder. I think you're right about the European cup winning Barelona side fading away badly... ditto the runners up, Arsenal. Chelsea? no. Your lot? Nope. I think maybe we should be looking beyond the bigger names for our player of the season.

My lot have been shit, as usual... but has anyone else got any nominations?

(and I see you disagree with Kanu but find it harder to refute my case for Matty Taylor?)

I just ignored your case for Matty Taylor. The mere fact his route to the England left back position is blocked by not only Ashley Cole and Wayne Bridge but also Jamie Carragher and Phil Neville says it all.

I am also not sure that it was a "very disappointing World Cup" (not great, but by no means bad) and I think it's a romantic view of events that sees Zidane "inspiring the French team to the final from the point of elimination".

Beckham would have been knighted and probably canonised if he'd had two and a half decent games and inspired England to the world cup final.

Team of the Year for 2006 - my nomination would be Reading. Blitzed the Championship, and despite relatively little spending over the summer, they look by far the most secure of the promoted 3. And thus, Steve Coppell for manager of the year.

Player of the Year - whilst Drogba and Ronaldo have had good starts to this season, it would be good to identify someone less obvious. Haven't seen enough of Reading to suggest anyone in particular, but maybe there would be a good place to start.

And the award for 'Didn't quite get the World Cup credit that he deserved' - either of the Trinidad and Tobago midfielders, Dwight Yorke or the young white scouse lad who moved from Port Vale to Coventry.

Footballingly, would like to see in 2007:- Chelsea not win the title; an English team to win the UEFA cup - preferably Newcastle; SWP to leave Stamford Bridge; Steven Gerrard to be given a broadly free midfield role for England; a general shift in football attendance away from the Premiership towards the lower leagues; and Burton Albion, Hartlepool United and Stoke City to all at least reach the play-offs. And for the sake of my two pre-season bets, Southampton and MK Dons to win their respective divisions.