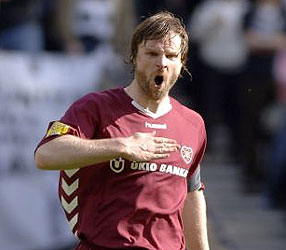 Is there a more principled and better role model for footballers in the UK right now than Steven Pressley?

The ex-Hearts captain - the "cement" that stuck the club together (according to Hearts owner Vladimir Romanov) has this week been released from the club.

His crime? In late October with Hearts second in the Scottish Premier League, Romanov declared that if the side didn't beat Dunfermline Athletic the following day he would put the whole team up for sale. The game ended in a 1-1 draw.

After this statement, Pressley (flanked by team-mates and fellow internationals Craig Gordon and Paul Hartley) stated "I have tried, along with the coaching staff and certain colleagues, to implement the correct values and disciplines, but it has become an impossible task. There is only so much a coaching staff, a captain and certain colleagues can do without the full backing, direction and coherence of the manager and those running the football club.

"While, publicly, I have expressed the need for unity, behind the scenes I have made my concerns abundantly clear. The last two years have been very testing for the players . . . morale, understandably, is not good and there is significant unrest in the dressing room."

Since that statement, he has been stripped of the captaincy, dropped and this week released from the club altogether.

In these days of money-chasing self-publicising footballers, to hear a principled and decent man stand up for himself and, crucially, his team-mates against a moneyed bully was refreshing and ought to be applauded. If only there were more like him in the game, eh?

Will you be saying that when a premiership club sign him on big money as he's a free agent....

no, I agree with LB. He's done absolutely the right thing and the fact that a big club might come in for him (although he can't sign for anyone until January) is all the evidence you need that this is very much Heart's loss.

Let's not forget that Pressley has not tried to hold Hearts to ransom - they have just forced him out because he is daring to speak out against the owners.

Good for him. There can't be many clubs worse run than this, right?

With all the vacuous footballers' biographies currently lining the shelves in WH Smith. This would be story that I wouldn't mind reading.

But he's probably had to sign a confidentiality agreement similar to George Burley.

Hat's off to him - I hope he gets a decent last pay day.

Apparently his team-mate Paul Hartley's future at Hearts is in doubt too.

Very refreshing - seems not all footballers are silly overpaid primadonnas.