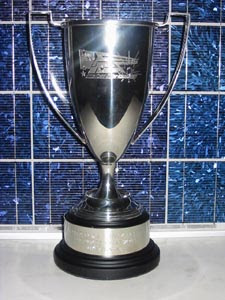 And so, another long and tiring season draws to a close and whilst the last of the domestic football matters was decided on Monday, there is one large shiny pot left to present before we disappear into a summer bereft of any football whatsoever (apart from the Copa America. And the Inter-Toto will be back before you know it.)

And, despite scoring no points in a nervy last week, the mantle of CUAS Predictions Champion passes to the legend known only as: El Tel.

Congratulations to everyone else also - the new scoring system certainly made things a bit closer than the previous season. Thanks to everyone who took part and, rest assured, it will be back for a brand new season in August...
Posted by LB at 10:07 pm

Thanks very much, Lord B. As ever, I thoroughly enjoyed the predictions run out. Just got to say a special thank you to my sports investments advisor - Peter Shilton, without him, etc etc.

Good summer to everyone.

And I got the Bronze Medal!!

Cheers to CUAS too for running the comp and giving me something to do!

Well done El Tel - did you do just as well against Lawro?

And thanks CUAS for another fun season. Will aim for higher than mid-table obscurity next time!

Congratulations El Tel! Be warned, though: I'm gunning for ya next season...

god, I really need to do a look-back at my pre-season predictions. Ideally at some point before the new season starts, eh?