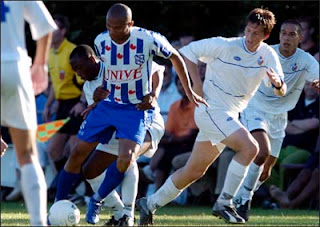 It's not been the best season for Brazilian international striker Alfonso Alves thus far. That was until yesterday....

After helping Malmo win the Swedish league in 2004 and finishing as the league's top scorer for two seasons in a row, Alves headed south to Dutch side Heerenveen in 2006 for a club record €4.5 million. He made an amazing impact in his first season scoring 34 goals in 31 games, missed out to Francesco Totti by one point for the European Golden Boot and made his debut for Brazil.

Scouts from across Europe sat up and took notice, and this summer saw an intense amount of speculation as to Alves' next club. Middlesbrough was his most likely destination but by the end of the transfer window he remained at the Dutch club. This speculation led to a falling out with Heerenveen and he was left out of the first five games of the season. He made his peace with the club and returned for the second half of the 2-0 defeat to Feyenoord last weekend.

And then came this Sundays' home game against struggling Heracles. Desperately needing to add to their tally of five points from six games, Heerenveen boss Gertjan Verbeek recalled the Brazilian striker to the starting line-up.

That was a decision that ended up being vindicated in record-breaking style. Alves broke the Eredivisie scoring record by bagging seven goals in a 9-0 home victory. His hat-trick came in nine first-half minutes, and the remaining four goals in nine second-half minutes. He was then withdrawn with ten minutes remaining (even though Heerenveen had already made all three permitted substitutions) to a huge ovation. Manager Verbeek called the performance "extraordinary".

What it all means is that Alves is still likely to move on in the January transfer window, as long as the dispute between the player and Heerenveen is resolved (the player feels the club priced him too highly). Whilst his return wasn't enough to salvage the club's UEFA Cup campaign (an astonishing two leg tie against Helsingborgs saw Heerenveen throw away a 5-3 first-leg lead by losing 5-1 in Sweden), his goalscoring exploits will be crucial to Heerenveen's pursuit of a European league position this season.
Posted by LB at 6:19 pm