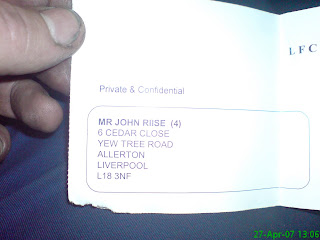 Hmm. That name looks familiar, and an address in Liverpool?

Aah! It must be that lovable left-footed Norwegian rogue John-Arne Riise.

But hold on a moment. That looks a bit like the payslip I get showing my meagre earnings at the end of every month. This surely, you know, can't be, can it? 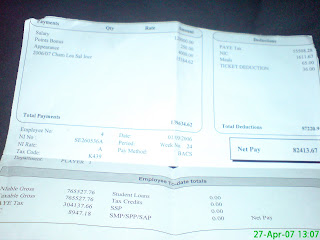 Good Lord. It appears it *is* John's payslip, albeit from about a year ago. £120,000 a month isn't too bad, although I'm a bit concerned as to the club's fortunes at that time if his "points bonus" is only a measly £250. Still, the Champions League increase is handy, isn't it?

He's paid by BACS. That's probably sensible - he's struggle getting the used notes into the back of his Bentley, I'd imagine.

I'd be intrigued to see Kieron Dyer or Darren Anderton's payslips, if only to see the figure in the "statutory sick pay" box....

Anyway, good old John trousered a cool £82,413 in September. All for kicking a ball round a park in Merseyside. Nice work, if you can get it...
Posted by LB at 5:46 pm

And he's not even the highest earner in the league...

Oh to be a professional footballer for one month...