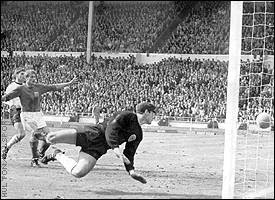 For over forty years, the football world has debated whether Geoff Hurst's second and England's third goal in the 1966 World Cup Final should have stood.

It's probably one of the most famous events in England's football history - the shot rebounding from the cross bar down onto the goal-line and back into play.

Famously, the linesman Tofik Bakhramov (actually from Azerbaijan where his statue stands proudly outside the national stadium) gave the goal and England went on to win 4-2.

In terms of whether it was a goal, this from Simon Barnes is the best and most convincing argument I have yet to read - the footage certainly supports this argument...

"Look at the still picture of the moment. Not at the ball crossing the line, at the forward in attendance. Of course it was a goal. Roger Hunt was there, perfectly positioned to put away the rebound, but he didn't do anything of the kind. He turned away to celebrate. Instantly, spontaneously, instinctively. It would have been a tap-in, but he turned it down. A goal-scorer only refuses a goal when he knows, knows in the very deepest parts of his being, that the goal has already been scored...."
Posted by LB at 6:51 pm