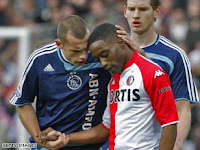 It was "Klassieker" weekend in Holland this weekend, with the league's top two sides going head to head in the country's most fiercely contested derby match.
A spirited Feyenoord side dominated the first half and Gio van Bronckhorst's 27th minute goal separated the sides at half time.
Ajax coach Adrie Koster made two changes at the interval, removing Luis Suarez and the apparently infinitely ineffective Albert Luque and the substitutes changed the game. Ex-Charlton winger Dennis Rommedahl side-footed a brilliant equaliser on 52 minutes, and Swiss teenager Siem de Jong sneaked a left foot shot in the far corner on 67 minutes after some woeful Feyenoord defending.
Despite looking down and out, the home side equalised with sixteen minutes remaining when ex-Rangers striker Michael Mols stumbled in the box and despite fierce Ajax protestations, a penalty was awarded. Marten Stekelenburg kept out Theo Lucius' spot-kick but Jonathan de Guzman was on hand to poke in the rebound. Ajax lost George Ogararu to injury shortly after having made their permitted three substitutions but held on for a 2-2 draw.
What interested me about this game is that the Dutch FA had made a bold decision to appoint a Belgian referee, Franck de Bleeckere for the match rather than using one of their own officials. A Dutch official would have understood the nature of the derby atmosphere and the individual traits of players they come into regular contact with, but is an impartial foreigner likely to provide a more objective and laws-driven environment? Other than the erroneous penalty award, De Bleeckere did well, I thought - his zero tolerance for technical transgressions was apparent early (a booking for simulation and one for deliberate handball in each penalty box) and he was authoritative throughout.
I'm largely in favour of allowing good quality referees to administer games outside their own country - indeed when Pierluigi Collina reached the retirement age for Italian refs there was some conjecture that me may continue his career in England (as our retirement age is higher.) I'm not arguing that the standard of refereeing abroad is better - but for a Premiership title decider on the last day of the season, why not consider a top European ref as an impartial and experienced option? In this day of foreign players and managers it seems a bit inconsistent that we can't do the same with our officials.
Posted by LB at 10:26 am

I think that's a really sound move - I'm guessing that with a larger pool of 'top referees', there could be the greater likelihood of players not taking for granted that they know what they could get away with, etc. But in the case of the English and Welsh FAs at least, I can imagine there being calls to simply increase the numbers of home-grown officials that are approved to cover top matches... with concomitant nationalist remarks and non-specific allusions to problematic 'cultural differences'.