Trying to standardise the world football calendar might seem like a great idea in principle, but try selling that idea to the Scandinavians whose leagues, on account of their impending winter, are now either concluded or well on the way.

It's been a really interesting season in Scandinavian football, actually, with the established order struggling and some new faces in the upper echelons of the leagues. 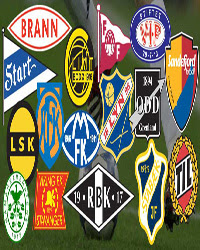 Norway's biggest club, Rosenborg Trondheim, have had a contrasting season. Despite Champions League qualification and subsequent excellent results against both Chelsea and Valencia, an unacceptable fifth place league finish (meaning no European qualification) cost coach Knut Toerem his job. The toppling of Rosenborg as the main power in Norwegian football was unexpected, particularly considering they have been as dominant a club as any European league has seen in the last two decades, winning fifteen of the last seventeen league titles.

Their demise opened up a chance of glory for another of Norway's sides, and it was last years runners-up SK Brann who grapsed the chance of the Tippeligaen title for their first Championship since 1963. Stabaek finished second - the best finish in the clubs long history - and Viking secured the "bronze" spot from Lillestrom.

As well as for Rosenborg, it was a disappointing season for 2005 champions Valerenga who ended up in seventh spot, a full eighteen points off the top.

The Finnish league was more predictable, however, with Tampere United comfortably retaining the Veikkausliiga title by eight points from their nearest rivals FC Haka (coincidentally, Tampere lost in the third Champions League qualifying round to Rosenborg). Haka improved on last season's third place finish to qualify for the UEFA Cup and last years second place side HJK Helsinki had a poor season and finished seventh. 29 year old Braizilan sttriker Rafael was the league's top goalscorer having spent most of his career in Finland.

A nailbiting end to the Swedish season saw the title race go down to the wire with three clubs - IFK Goteborg, Kalmar FF and Djurgardens in with a chance entering the final day. A surprise 1-0 home defeat by relegated Brommapojkarna ended Djurgardens hopes, although ultimately even a win wouldn't have been enough. Kalmar did their bit beating AIK 2-0 but they were denied a fairytale first ever league title by one point as Goteborg's two first half goals handed them the title for the first time since 1996.

Swedish football is one of the more interesting European leagues - indeed since Goteborg's dominance between 1990 and 1996, seven different sides have won the Allvenskan title. Halmstads (twice), AIK, Helsingborgs, Hammarby, Djurgardens (twice), Malmo and IF Elfsborg have lifted the trophy in the last decade.

It's also one of the more closely contested with only fourteen points separating the top 8 sides, and with the top league to be extended from 14 to 16 clubs in 2008 it will make for an interesting season. Whether we are entering another period of IFK Goteborg dominance, I am not sure - a disappointing year for Henrik Larsson's Helsingborg ended with a ominous 9-0 thumping of a competent Halmstads side and so perhaps signals their intent for next season.

(the Danish season excluded as the season runs from July to December and March to May - so begins/ends like most of the European seasons.)

FC Copenhagen pretty much dominate it anyway - they have won it for 5 of the last 7 seasons and are top again this time....