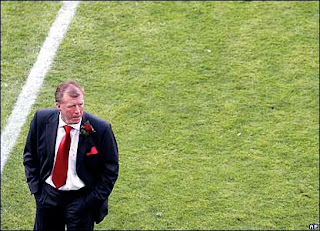 You will note that my predictions for the qualifiers for Euro 2008 were ultimately all correct barring one glaring mistake.

If this is the best league in the world, the "golden generation" with a raft of players considered the world's finest, defeats to Croatia and Russia and draws against Israel and Macedonia are simply not good enough.

Too many foreign players, injuries and suspensions - the whole gamut of excuses will be rolled out. These are all red herrings. There are two reasons we haven't qualified. Firstly, the blame needs to squarely rest with the manager whose climbdowns, tactical misadventure and inconsistency have failed to get a decent set of players out of, let's face it, an easy group.

Secondly, some of the senior players need to look at themselves in the mirror and wonder if they really performed to anywhere near their talent throughout any of this campaign. Gerrard, Lampard, Robinson, Bridge, Beckham, Joe Cole have all been way under par in an England shirt over the last eighteen months. As Simon Aldred from Cherry Ghost succinctly put it (an evening better spent, I reckon) - "...there is no better sport than watching eleven dejected millionaires get rained on...."

All this hubris about the quality of the Premier League and it's English stars needs to end now. On the basis that Greece, Poland, Croatia and Romania have qualified - hell, even Finland came nearer to qualification than England - it's time for the manager to go and for someone with a half decent knowledge of international football to take over. And it might help for a dose of reality to be administered to everyone within the English game. We are (and have been for eighteen months) sh*t. I just wish we knew we were.
Posted by LB at 11:51 pm

Wayne Bridge was amazingly poor last night and we could've lost 5-2 in reality.

Do you know the worst bit though? The fact is that I don't care. Over that 18 months my support for the National Team has been slowly erroded. When the players start showing passion then maybe I will will.

Croatia were a better team technically and tactically and fully deserved the win. Well done to them.