Robert Earnshaw for Nottingham Forest (vs Southampton), 3rd May 2009 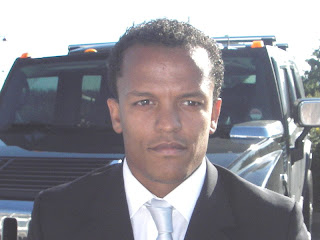 Robert Earnshaw: in need of a trim, if not a new car

When it comes to haircuts, nature has long since ensured that I need opt for nothing more expensive than a trip to the local barber for a simple buzz job. A trip to Tony & Guy would be not only a needless extravagance, but also a complete waste of time. No, for my "number 1 all over", I merely have to pop round the corner to a barber on the Melton Road for a no-nonsense clipper job that costs me the princely sum of £4.

I'm not usually one for gossiping with my hairdresser - I'm hardly in there long enough - but this Friday, in the course of a conversation about Brian Clough, "The Damned Utd" and Nottingham Forest in general, my "stylist" told me the following anecdote:

Apparently, earlier that day, a young lad had come into the shop for a haircut. Upon being asked what he did, this young lad said that he was student at Nottingham Trent University. Oh yes, when do you start back for the new term then? Not until the middle of October, he replied. The barber said he thought that this was a bit late for term to be starting, but he didn't think anything more of it, finished the haircut and charged the young man £3.60 for a standard haircut minus the 10% student discount. The young man paid up, walked out of the shop and climbed straight into a brand spanking new, top-of-the-line Range Rover and drove off.

"You do know who that was, don't you?" Asked the barber's colleague.
"No?"
"Robert Earnshaw"

Now, my immediate reaction upon hearing this story was to marvel at the fact that an international footballer was down to earth enough to have a £4 haircut. This was pretty quickly overtaken by a feeling of astonishment that a footballer, the subject of several multi-million pound transfer deals and the likely recipient of a salary in excess of £10,000 per week had saved himself 40p on a haircut by pretending to be a student. If he's on £10k a week, that's about 15 seconds work.

"And what's more, he didn't leave a tip either" marvelled my barber, ruefully. "Next time he comes in, I'm charging him £70 and telling him there's been a price rise".

What's the world coming to, eh?

I can take a hint though, so I paid for my haircut with a fiver and told him to keep the change.
Posted by swisslet at 7:47 am

That takes considerable nerve - and all for the sake of 40p. What would he have done if he'd been recognised and challenged over his non-student status?!