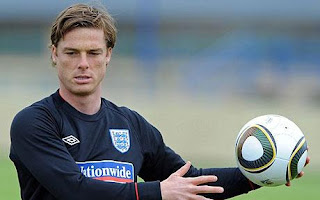 Did you see that remarkable stat this week that, before the game against Wales, Scott Parker had won seven caps for England under three different managers over the course of 8 years whilst playing for five different clubs?

Since his debut against Denmark in 2003, the following players have been capped in (broadly) midfield:

Now, of those, the most capped are basically wingers: Wright-Phillips, Downing, Walcott, Lennon, Young, Milner.  As are Thompson, Richardson, Bentley, Agbonglahor and Johnson.  Competing for the same central midfield slot in the team as Parker were players like Barton (1 cap), Huddlestone (3 caps) and Wilshere (5 caps).

So why wasn't Scott Parker making the team more often?

With that much stability in midfield, we must have been amazing over the last 8 years, eh?

To be fair, Parker probably hasn't helped himself with his choice of clubs, particularly when he left Charlton for the Chelsea bench.... but after a brilliant season last year in a struggling West Ham team (he was voted the Football Writers' player of the year and was on the shortlist of 6 for the PFA award), it looked like the now nearly 31 year old Parker's moment had come again when he was picked in the team to play Bulgaria at the start of September.  Result: a good 3-0 win and talk of how England were rebuilding and it was the dawn of a new era.

Our midfield for this week's game against Wales?  Barry and Lampard.  And that was only probably only because Steven Gerrard is injured.  Or, charitably, Parker is now suddenly such a key player for the national team that he was being rested for the Montenegro game because he on a yellow card and risked suspension.  Hmm.  If that's true, then you wouldn't blame Parker for marvelling at the sudden change in his international fortunes.

Hmm.  Actually, with that in mind, maybe we should just ditch Parker too.

Tom Cleverley anyone?
Posted by swisslet at 7:16 pm