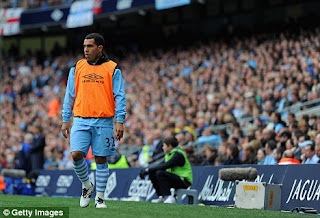 "Roberto Mancini has told his sulking striker Carlos Tevez that he can still have a big future at Manchester City.

Well, Tevez was supposed to be involved against Bayern Munich, before deciding he didn't feel like it and refusing to come on as a sub for the club.

Mancini after the match, around 14 hours later: "If one player earns a lot of money, play for Manchester City in the Champions League and has this behaviour, for me he can't play. Never.

"Afterwards I wanted to put Carlos Tevez on the pitch, he refused to go on the pitch. For me it is a bad situation."

Just as they looked as they might have the skill and spirit necessary to challenge for the Premier League and Champions League, the wheels come off at Manchester City. Dzeko storms off the pitch when substituted and Tevez refuses to come on as a sub. Being named as a substitute and then refusing to come onto the pitch is absolutely unforgivable behaviour for a footballer, surely?

In spite of his obvious desire to leave the club, Tevez continues to be paid handsomely and is under contract to his employers. And people wonder why football may be losing touch with the common man, who wouldn't last five minutes if they refused to do their job when asked.

It's happened before, of course (Pierre van Hooijdonk went on strike at Nottingham Forest) and no doubt it will happen again. What next for Tevez, though? A season in City's reserves? An apology and reinstatement to the squad? Or should everyone club together, buy out his contract and hold his registration so he can't play for anyone?

Footballers are idiots. Who knew?
Posted by LB at 11:19 pm