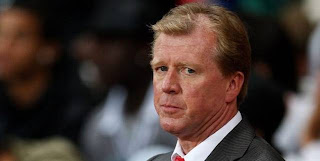 Steve McLaren, 30 August, 2011: "What happens over the next few days will decide whether we can win promotion or not. Absolutely it will, without a shadow of a doubt. What we do now, over the next few days, will determine whether we are good enough to challenge or whether we are scrapping to get into the play-offs. I don't want that. So, I will be making it quite clear what we need. Deliver it or it is going to be a long season.

"We have been saying it for long enough. You [the press] say that Billy Davies was saying it for two years previously, I don't know about that. But I can see it. Over the next few days, we will see the ambition of this club. That is the key thing we will see. We need to go the extra step now."

Just five weeks later, the former England manager has resigned from his position at the City Ground, with chairman Nigel Doughty also set to step down at the end of the season after a decade at the helm.

Davies and McLaren may be very different types of manager but their complains about Forest are eerily similar. Both have voiced their concerns about the lack of investment in the team and both believe that the ambition of the club falls some way short of their own. Davies took Forest to the play-offs twice and was then sacked - presumably the board were fed up with his constant griping - whereas McLaren has now walked just 111 days into his tenure citing the very same problems.

I rate McLaren and I do not blame him one bit from walking away from a club who clearly promised him the earth before delivering next to nothing. To lose one manager may be regarded as misfortune, to lose two looks like carelessness. Ex-Forest legends Garry Birtles and Kenny Burns also agree that McLaren was perfectly within his rights to walk.

It looks to me that the Forest board has fundamentally no idea what they are doing and I'm not even a supporter. For lifelong fans seeing the same grumbles and same issues continue to rear their heads must be unbelievably frustrating.

Forest are clearly never going to emulate the success of the Clough era. But, they could be a solid mid-table Premier League side if anyone at board level actually believed that was possible. Until they do, perhaps they should employ a boss for whom Championship survival and a balanced budget would constitute success and then everyone's ambitions would be aligned?
Posted by LB at 10:52 am