"Who is the coach of the World and European Champions?"

If you are asked that question in a pub quiz, then you're going to be reasonably confident of getting the answer right.  No? 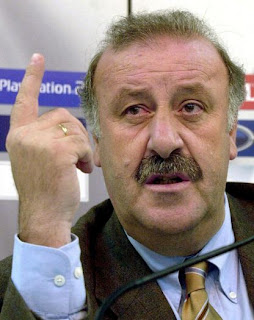 ....That's what he used to be called, anyway, when he was a humble commoner.  As of February this year, thanks to the King of Spain (a football fan and very much the man who puts the "Real" into Real Madrid), he's now apparently officially known as the Ilustrísimo Señor Don Vicente del Bosque y González, Marqués de Del Bosque.

Wow.  That's quite a title.... (and, to be honest, much though I'm sure he's an outstanding manager, don't you reckon you might have been able to win at least a couple of those titles with the players that he had at Madrid and has with Spain?)

The only other man I can think of in football with an actual, honest-to-goodness title (beyond a knighthood, anyway) is the Lord of the Manor at Frodsham, Jibberish Seaside.  As the Queen is apparently an Arsenal fan (as if she didn't have enough problems), perhaps we should expect a dukedom for Tony Adams in the New Year's Honours list? A baronetcy for Ray Parlour, perhaps? Viscount Perry Groves of Bow?
Posted by swisslet at 9:08 pm

I think you are missing (Kevin) Prince Boateng.

I don't know why they give him a title like that. I think that there are over exaggerating